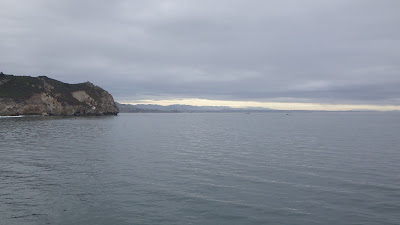 At 8 o'clock this morning Avila Beach was gray, and a cool 50°. The morning offshore flow was still moving out over the ocean, carrying the bacon grease smell from the grill at the Custom House out over the sea. There was a closely spaced swell out of the SE, typical of an impending storm and 2 to 3 foot surf. The water temperature matched the air at 50°. 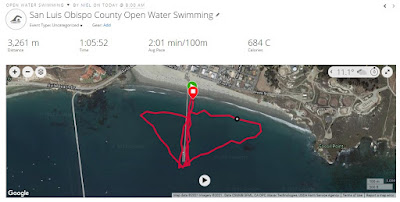 I was on my own and that storm swell was interesting so I decided to do my two triangles so I could work with the swell from all directions. The water was nice and clear and everything was set for a nice swim. Once again the water on the west side of the pier was noticeably colder by a degree or so. 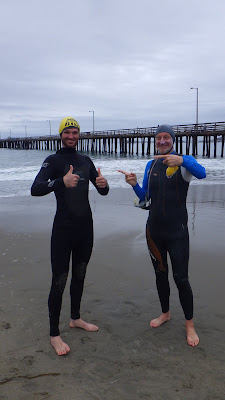 When I was walking out Tom Lorish (on the right) and a surprise guest were just getting in. Laird is a P.T. at Spirit Winds that Tom and my wife see and this was to be his first open water swim. Tom reported that Laird enjoyed himself and will be back.
I'll swim Tuesday morning at 8 and Thursday morning at 8:45.
niel
Posted by Niel at 12:55 PM