The big news at Avila Beach today was that this morning the swim buoys were put in for the summer. It means that summer is coming, that we will have some more things to assist us with our navigation and Jodi and Stephanie will finally know what the rest of us have been talking about when we say that we will 'swim to the last buoy at the creek' when it is not there. 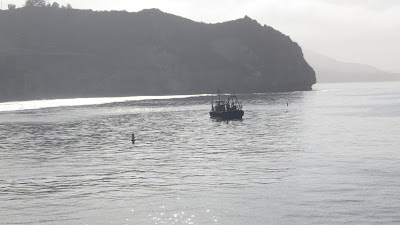 As I was taking the water temperature from the pier the barge was putting in the last of the eight buoys that create a No Boats Allowed zone for swimmers. 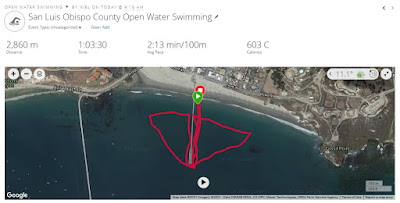 Duke and I planned to get in at 9 today instead of our usual 8 to 8:30 start. I'm not really sure why we did that except when Duke suggested it on Tuesday it sounded like a nice chance to sleep in a bit. Sara joined us today for the first time. She has swum by herself on the weekend and was a welcome addition to the group. Being 9 o'clock Tom Lorish was getting in so he joined us.  The plan was to first do a triangle on the east side of the pier. Duke and Sara would probably get out then. I was going to do a second triangle on the west side to make about 3000M and to swim by all eight buoys.  The air was about 50° and the water 49°. There was a light breeze, small surf and hte water has dirtied up to a red brown, almost the color of a plankton bloom color but the water is too cold for that  to be happening. 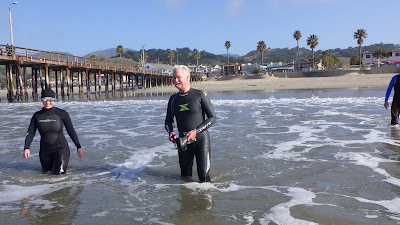 Sara, Duke and half of Tom moving beyond the toe test zone. 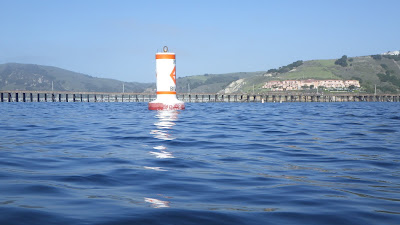 At the last buoy on the east side 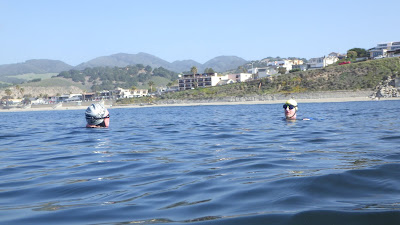 Duke and Tom at the same spot. Tom wears a sleeveless wetsuit was starting to feel the cold so he went on by himself. Duke Sara and I swam to the pier and to the end for a second time. Duke and Sara went in from there and I did my second triangle on the west side.
The next swim is Saturday morning. Stephanie, Jodi, Sara and I will get in at 8.  Then Sunday at 7:30.
niel
Posted by Niel at 12:15 PM