Everyone felt cold this morning. Avila was much the same as yesterday so maybe we were just tired from keeping up with Jodi yesterday. We had the same gray lid, no wind and a smooth surface. There was a SW current that felt much stronger than the small chop that was on top. The air temperature was 57° and the water was 52°. Jodi, Leslie and Niel were joined by Sue, who we have not seen in some time. Sue lives in England and drops in to swim with us when she is on the West Coast.  Leslie wanted to cruise the buoy line so we decided to start with her and continue on once she went in. That plan only lasted until we grouped up for the first time at the last buoy on the east end. Sue does all of her swimming bareback and by the time I caught up she was getting cold and had started back along the buoys toward the pier. Leslie suggested that we go to the end of the Avila Pier and then to the west end of the buoy line so we headed off. Stephanie caught up with us at the end of the Avila Pier. At the west end of the buoy line Leslie was ready to swim back to the pier and go in. Stephanie, Niel and Jodi did a point to point swim, figuring out where we wanted to go next at the end of each leg. With the SW current against us the 730M between the ends of the Avila and Cal Poly Piers felt like a lot longer than usual. 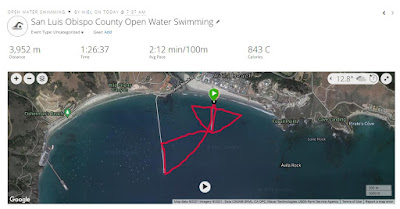 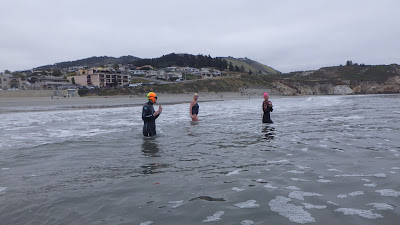 Jodi, Sue and Leslie wading in at 7:30
I spoke to Tom Lorish as I was coming in along the Avila Pier. He usually gets in at about 9.
I'll swim Tuesday at 8AM.
My Thursday morning is getting crowded. I'll confirm when I'll swim in Tuesday's post.
niel
Posted by Niel at 11:24 AM