Avila was all grey overcast and a light wind. The air and the water temps were 53°.

Leslie got in at 8 and swam parts of the buoy line and to the end of the Avila Pier.

Niel got in at 8:25 and swam two big triangles. 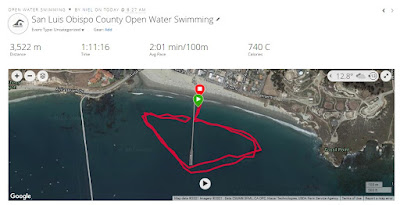 Tom Lorish got in at 9 and swam over to the CP Pier.

I spoke to Leslie on the beach as we were getting out and in the water.

I crossed paths with Tom near the end of the Avila Pier and spoke to him for a few minutes.

There was a small swell surprisingly strong current out of the SW. My route gave me eight exposures to the water conditions and kept my swim interesting.

During my second triangle the sun came out and the wind picked up, which was a reasonable bargain.

The lucky guy was Duke. He didn't make it to the beach because he found a wet floor in his garage and traced it to the kitchen. The story ends well though. The source was his water softener outside and the water was running into the garage under the garage door. He is probably figuring that he just saved enough money for a nice toy!

Google got the problem with the Blogger fixed and I was able to add the image of my route at 6:34PM.