At 8 o'clock Niel, Jodi, Stephanie, David, Leslie, Theresa and Grace were ready to swim. Avial was very gray and cool and felt chilly but there was no wind and the ocean was flat and glassy. The air temperature was 58° and the water 51.5°.
Theresa and Grace were a bit behind so the rest of the group got started and swam down the east buoy line and and back to the opposite end near the creek. Then over to the second crossbars on the C.P. Pier. Leslie is nursing a sore shoulder and headed back. The group swam to the end of the pier where Grace and Theresa caught up, then over to the end of the Avila Pier. David and Stephanie headed in. The final four swam to the last buoy and back along the buoys to the pier. Grace, Theresa and Niel headed in. Jodi wanted to do another lap and swam to the end of the pier, to the end of the buoy line and back to the pier. At this point Jodi checked her new Garmin swimming watch and had 4600M, which was short of her goal of 5K, so she swam back out to the end of the pier and back in to make it 5045M in 1:55. 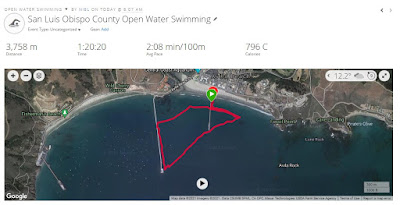 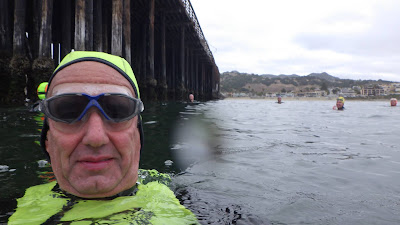 A peak of Jodi behind my head, Niel, Grace, Theresa, Stephanie and David,
at the end of the Avila Pier.
We will swim tomorrow morning at 7:30.
niel