The morning fog was clearing late. When I arrived at Avila at 10:20 there was a hole forming over Avial with sunny skys west towards the port and still clearing to the east towards Shell and Pismo Beaches. 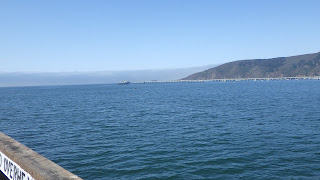 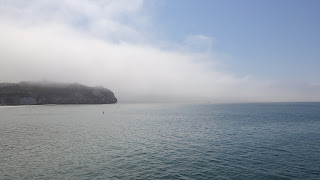 There wasn't much of a crowd at 10:30 but the beach was filling up and by noon it was full .
We had a nice group today with people filling in who I have not seen since we stopped swimming at 11 more than a year ago.  Swimming today were Niel, Duke, Jodi, Sara (who I have not seen in a year plus), a friend of Sara's who is starting in open water swimming and Kore (?sp) who is the Masters coach at Cuesta, and a friend of Stephanie and Jodie's. 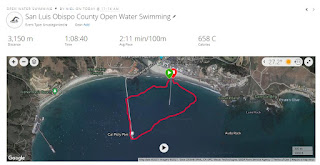 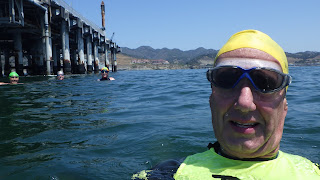 Kore, Duke, Jodi and Niel at the end of the CP Pier.

Duke and I hung on the beach for a while soaking up the perfectly comfortable sunshine.

Jodi's nephew has made the US Olympic water polo squad and at 6'-1", 185#, he is the smallest member of the team. They have two swimmers at 6'-7". Duke, who's collegiate water polo carrier was a while ago, cannot imaging what the game must be like now.

Duke and I will swim Tuesday morning at 8.