Conditions permitting, I was wanted to go long today, so I added a couple of gels to my kit with the camera and car key. I never have gotten comfortable with hiding my key on someone's tire, so I have a 'dumb' version that I carry with me in the water.

I'd done the route I had planned once before and it came out at almost 4900M. If today's conditions stayed flat enough I was going to do a solid 3 miles today.

At 8:30 the conditions looked very nice. It was grey, overcast and still . The air temp was 57° and the water 58.5°. There was a bit of a swell out of the SW, so it was not as dead flat as Thursday but still looked nice. While I was out on the pier getting the water temperature I saw three swimmers heading towards the Cal Poly Pier. Could of been Jodi, Stephanie and Leslie if they go in at 8. I don't know. I didn't meet them in the water or after.

Tom was getting ready to get in so we planned to swim the same route for a while. Tom is a faster swimmer so I left first and we would meet up at the end of the Cal Poly Pier and when I arrived Tom was waiting for me. I don't know where he passed me, maybe I mistook him for some fast moving water creature. We swam down and back along the CP Pier, apparently passing Theresa and Grace going the opposite direction. From the end of the CP Pier Tom went to the Avila Pier and in for about 4K M. I doubled back on my route until I was at the first buoy. I had one gel left and didn't want to be short of 5K so I ate the gel and swam around the Avila Pier for 3.5 miles and 2 hours in the water. 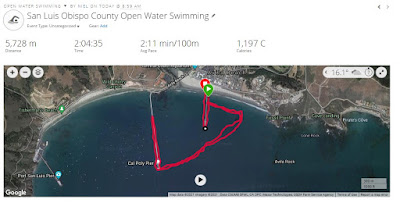 As far as the competition goes, I saw this BBQ set up neat the showers and new that I would always be outclassed by someone who had this level of commitment. 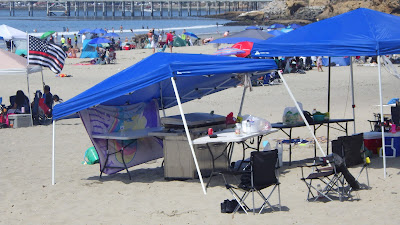 Duke and I will swim at 11 tomorrow. You are all welcome.
A high five and congratulations to Theresa who has been a great swimming buddy these past 2-1/2 years. Theresa is starting her professional career in marine biology in Irvine on Monday.  Theresa, keep in touch and you are welcome to drop in for a swim whenever you are in town and want to do some cold water swimming.
niel
Posted by Niel at 3:02 PM

CONGRATS THERESA!!!! So much hard work and good luck 07/19/21 on YOUR FIRST DAY at your new position We all feel better knowing you're out there working for the health of the ocean and looking after us. XOXO Leslie