Niel and Theresa Join the 4th of July Boat Parade

Well, it is more like they joined us be we did wind up swimming with the boat parade.
Today was the first time that I have swum at 11 AM in over a year. I arrived at 10:20 and just found a parking space near the Post Office, where I always parked in the pre-COVID days. Avila was bustling and the beach was crowded.  People and pets were getting organized for the 4th of July Dog Parade. I didn't know anything about a boat parade. 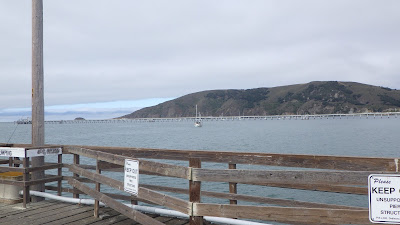 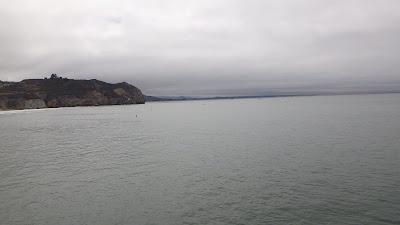 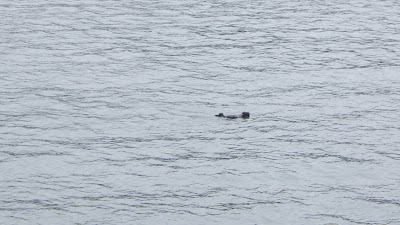 This otter was near the first buoy, diving for clams and cracking them open with a rock. I could hear the sound from the pier.
So, how many crunches would I need to do so that I could crack open a clam on my stomach?
Theresa was my swim buddy today. We decided to go west along the buoys, over to the second crossbars on the CP Pier, to the end of the pier and from there swim the long leg to the reef buoy which is past the end of the buoys on the east side of the Avila Pier, and come back along those buoys to our starting place.
Well, that was the plan. When we arrived at the ocean end of the CP Pier we found ourselves amid 8 boats of all sizes, all decked out in red, white and blue bunting and motoring towards shore between the Avila and CP Piers.  There was a Harbor Patrol boat following the pleasure craft so we swam towards it and asked what the plan was. The parade route was east along the west buoy line, out and around the Avila Pier, out and back along the east buoys, back around the Avila Pier, west along the west buoys and back out to sea. Our proposed leg from the ocean end of the CP Pier to the reef buoy didn't sound like a good choice so we retraced out route out in along the CP Pier and the western buoy line. As we were swimming east along the inside of the buoys the parade was coming west just outside of the same buoys so from the shore we were part of the parade, just going in the opposite direction.  I didn't hear any applause from the shore but I'm sure there was some. 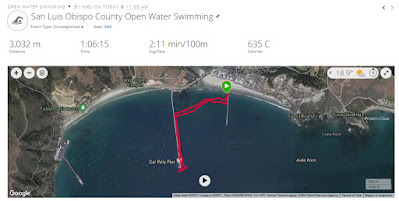 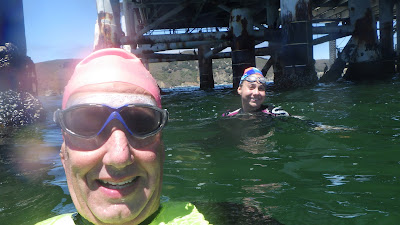 Niel and Theresa at the ocean end of the Cal Poly Pier. The sun had come out at this point.
The swimming was fabulous, a bit choppy but the air and water were warm and comfortable.
For the holiday I had brought a dozen chocolate blobs to share so Theresa made out pretty well.
I'll swim at 8 on Tuesday.
niel
Posted by Niel at 2:34 PM