Avia didn't put on anything special for the first day of July. I arrived about 8:30 and parked next to Duke's car. He was already out on his 1000 yd. sprint route.  That is not an otter or other U.S.A. (Unidentified Swimming Animal) in the center of the frame but Duke bringing it home. The photo couldn't capture the impressive wake he was pushing up. 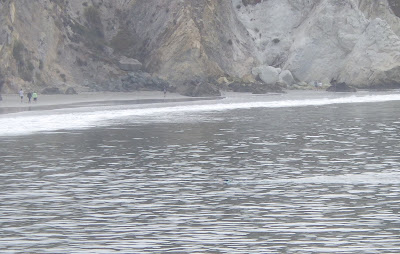 Swimming conditions were great: grey, windless, small surf, 62° air, 56.5° water and no red tide. I spoke with Duke after he got out and he had encountered some really stinky water along the west side of the buoy line which was probably from the creek. I changed my route and swam down the east buoy line, over and around the kelp and buoy at the reef, directly to the end of the CP PIer where I met up with Tom Lorish who had seen me round the reef and head towards the CP Pier so he swam me down. We swam down to the second crossbars and back where Tom went to the end of the Avila PIer and I retraced my route out. 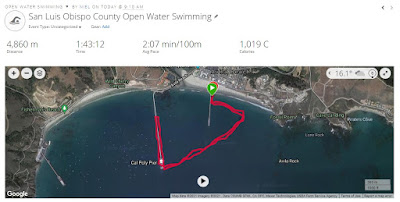 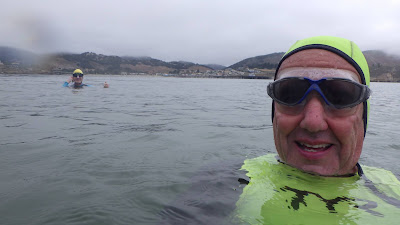 Tom and Niel at the end of the CP Pier for the first time. 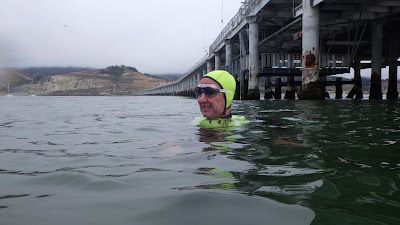 Tom got this one of me with the lane lines to the second crossbars in the background.
I'll swim at about 9 on Saturday and I'm going to try swimming at our pre-COVID time of 11 on Sunday.
niel
niel