On Saturday morning the swimming conditions at Avila Beach were great. The air was 57°, the water 59° and still very clear and it was flat and windless. It was foggy but at least at 7 AM the visibility was plenty good for a trip over to the end of the Cal Poly Pier. 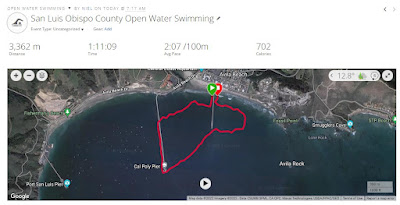 When I got to the end of the CP Pier and looked for the Avila Pier the fog had closed in and it was just a dark smudge along the water line. I headed that way and in 400M or so I could see the pier well enough to make a slight correction and head for the end. 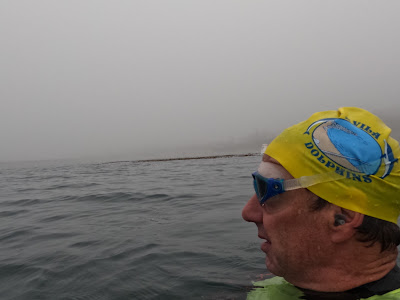 This was taken at the reef buoy, (its just at the edge of my cap). Things were pretty closed in but I found the end of the buoy line easily enough and finished up.
Tom got in a bit after 9 and swam around the Avila Rock, so the fog must have been lifting by then or he'd be in Pismo by now.
We'll swim at 11 tomorrow.
niel