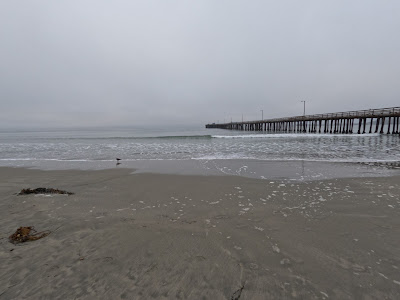 At 7AM Avila was as gray as a July morning at the beach. The air temperature was 55° and I measured a water temp of about 58°. Previously, when I went out on the pier to measure the water temperature I used a 300mm thermometer with one degree gradations. The distance along the scale between 50F and 60F degrees is about an inch. Now that the pier is closed I'm measuring the water temp while swimming. I clip my 6" thermometer to my belt along with the camera and take a reading out in the water at some point. It has two degree gradations and the distance between 10C (50F) and 15C (59F) is about a three eighths of an inch. To read it clearly I could use some swim goggles with a magnifier, so I could say today was 'just below 15'.
Tom's toes said 60°. 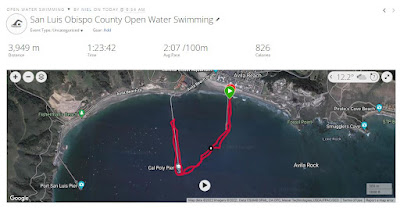 It was clam and flat, the surf was 2 to 4+ foot. The south swell we had earlier in the week must be tapering off because the biggest waves didn't have any power in them.  There was no foam, red tide or funny taste today so the sea took away what it had brought earlier in the week. The creek mouth had tested high for bacteria on Monday and the warm ocean water has caused the kelp to start breaking up (Wednesday the beach was buried in kelp) so either of those may have contributed to the poor water conditions.
Jeff Reid - If you are following the blog please post an email reply so I'll have your address and we can plan a Three Martini swim during your next visit.
I'll be back Saturday morning at 7 and Sunday at 11.
niel
Posted by Niel at 11:39 AM