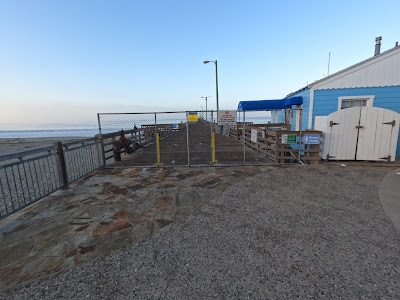 After two days of driving and one day of crawling under my in-laws house and some other fun stuff I was ready to get in the water and stretch out my back.
But first the Port San Luis Harbor District has begun the long delayed renovation project for the Avila Pier. The project is expected to require up to two years and I will not be able to get a pre swim water temperature until I can get back on the pier, so my water temps will be taken during the swim with a small thermometer.
Hey Peter, with that fence up how are you and the other members going to get to the yacht club? 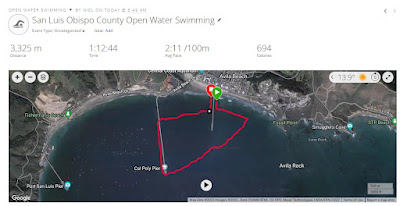 The air temperature was 55°, sunny and the water felt like it varied from the low 60's to the high 50's. The wind was out of the south and there was an occasional 5' set but the surf was mostly 2 - 3 foot. 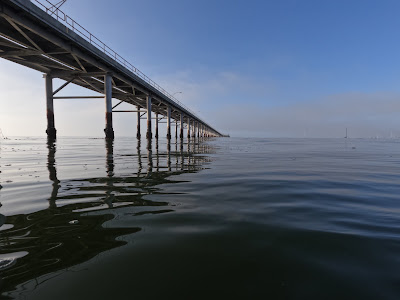 Looking back along the Cal Poly Pier with one of the 5' swells filling up the horizon. 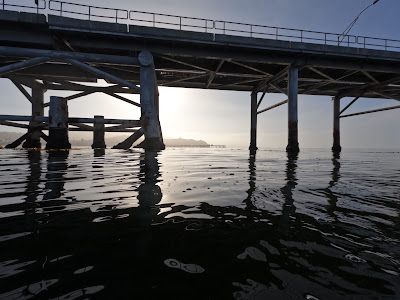 And the CPP with the Avila Pier in the background.
Beyond the surfline the water was flat and glassy and I had my nice swim, except the water quality was bad in some places. There were areas of red tide, mostly on the west side of the CPP and big patches of foam on the water. These were well beyond the surfline, one was near the CPP. The bubbles were dense and thick, as if there was detergent in the water, and it tasted metallic.  😝
I hope it is cleaned up on Thursday when I'll swim at 7.
niel