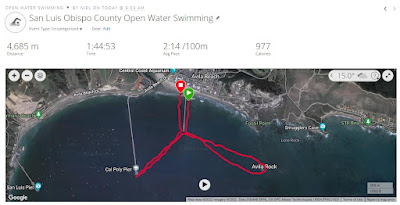 Tom and I bagged a new route this morning that I'm calling The Y.  The route is to the end of the Avila Pier, over to and around Avila Rock, back to the Avila Pier, then over to the end of the Cal Poly Pier, back to the Avila Pier and in. Not quite 4,800M but we'll call it a 3 mile swim.  You could find another 300M and make this a 5K swim.
Tom started about 15 minutes after I did and finished before me. He caught me at the Avila Rock and then we passed each other near the end of the CPP, he on his way back and me on my way out.
It was overcast and spitting at 9 but the visibility was good.  The air temperature was 60° and the water was 59.5°.  The waves were a bit larger than on Tuesday and the wind was just starting to come up.  It felt pretty flat on the way to the Avila Rock, was getting bumpy on the way back to Avila and was quite pushy towards my left shoulder but not choppy going over to the CPP. I had to correct my course three times. The swim back to Avila was nice and 'downhill'. 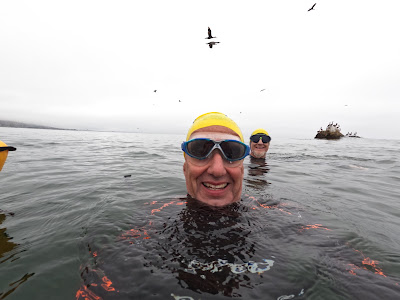 Niel, Tom and the Avila Rock 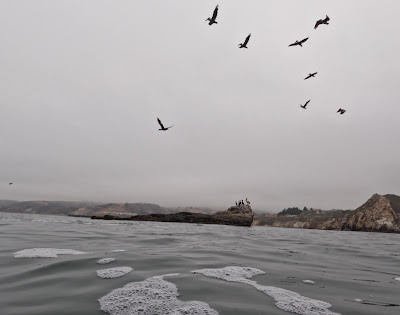 The Avila Rock without us. 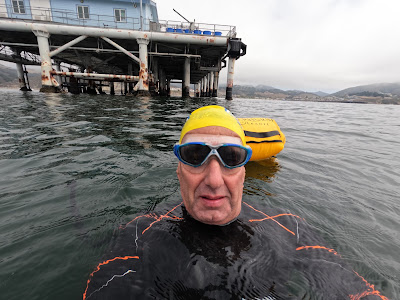 I had to document getting to the end of the Cal Poly Pier.
I'll be traveling this weekend and won't be swimming on Saturday or Sunday. I'll be back in the water Tuesday morning.