I had a nice solo swim today. Mornings in Avila are overcast and gray this time of the year and will clear by 10 or 12 o'clock. The air temperature was 54° and the water 53.5°, which surprisingly felt noticeable warmer than Sunday's 52°. I did my two triangles route and pushed the east and west ends out past the last buoys in order to make almost 3,200M. Towards the end of the swim a SW wind and chop was starting up. The chop wasn't very pesky but near the end of the Avila Pier the accompanying current was pulling up deep water and dropping the water temperature by a few degrees. It is sure motivating to swim into that large of a temperature drop!

I spoke to Tom Lorish along the pier and saw Sue on the beach. She had just missed me when I was getting in and we never connected in the water. 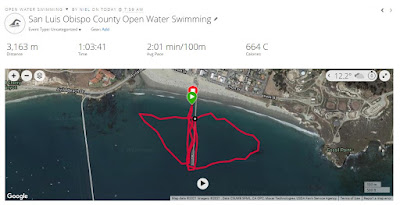 I have an early meeting Thursday and will be getting in the water about 8:45 or 9.
niel
Posted by Niel at 1:37 PM