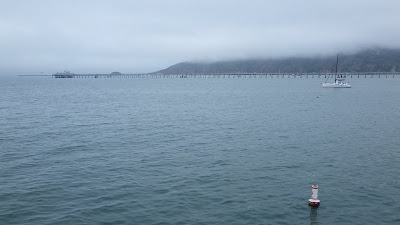 Avila felt and looked like winter this morning. It was 57° but felt cool and damp. The wind and swell was out of the SE with a second swell out of the south.  The water was 58° and the red tide was gone so that was a big plus. I was on my own. I got in at 7:50 and did two triangles with four trips along the length of the pier.  The conditions were quite rough at the start,  the chop wasn't too high but it was being pushed by a strong current so starting out along the pier had me wondering what this was going to be like. By the second half the wind had shifted around to the SSW and things were flattening out. The water temperature was very comfortable.