It was a very gray morning in Avila Beach with thick low clouds, no sun, no wind and an air temp of 58°. I measured a water temperature of 58° but with no sunshine it would swim a degree or two colder. There was 3 foot surf and a nice swell farther out and east of the Avila Pier.  Jodi, Tiki and Niel got in at 8 having planned a longer swim that had several drop off spots built in; the last buoy at the creek, the second crossbars on the Cal Poly Pier, the end of the Avila Pier, the end of the CP Pier, to the last buoy in the line on the left and back along the buoys to the Avila Pier and in. 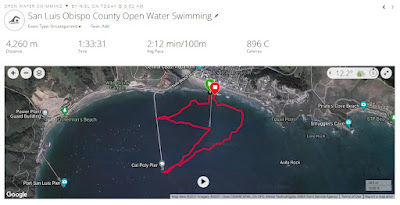 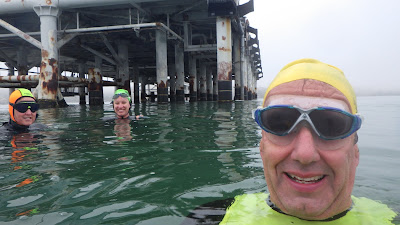 Jodi, Stephanie and Niel at the end of the CP Pier
The flat gray light and the swell made navigating harder, requiring some complete stops to find my landmarks but the water was really nice.
Tom's car was there but I didn't see him in the water.
I'll swim tomorrow at 11 with Duke, Jodi and whoever else shows.
niel
Posted by Niel at 11:37 AM