Stormish
The predicted cold front was rolling through the Central Coast right on time this AM. A 9 Avila was low clouds, gray, feeling stormy with a wind out of the ESE to SE, andi a nice chop on the 59° water. The surf had not come up. The air temperature was 55°- 60°. 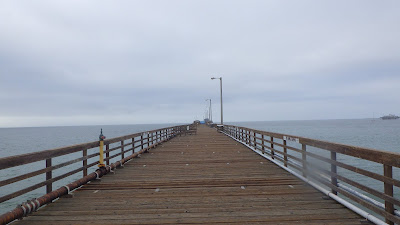 No tourists about this morning. 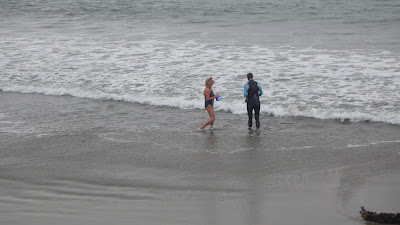 I got a photo of Sue and Tom getting in when I was on the pier. 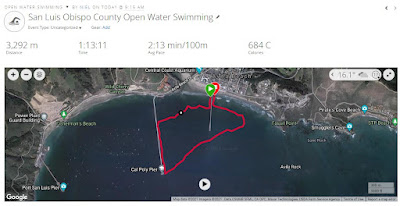 I swam a 'circle'; the west buoys, to the second crossbars on the CP Pier, out along the pier, back over to the buoy on the reef and a hook left to pick up the 4th buoy on the east side and in along the line and out. 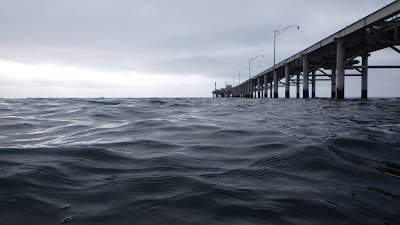 From the third crossbars looking to the end of the CP Pier.
This is not a B&W photo.  There were almost no colors this morning.
Tom said that he saw me near here as he and Sue were heading in along the pier as I was heading out, but I missed them in the chop.
It was a rough water swim everywhere today but the leg out along the CP Pier was the toughest. The current, wind and chop were on my left shoulder and it got rougher the farther i got out along the pier. I was not swallowing any water but I was seriously swimming uphill. Tom agreed.
The sun came out for a bit  as I was passing the end of the Avila Pier.  That and made a long stint swimming across the chop more cheery.
By the time I was at the showers the clouds were clearing and the wind was going down. Looks good for Saturday at 8.
niel
Wednesday evening swim report by Leslie:

Tiki, Leslie and Jodi.
We went in, super low tide, calm flat water, had a fast lap around the pier in honor of Dukes U Burner and went 4th creek buoy and back under the pier to first and in, the water under the pier was breathtakingly cold, but otherwise wasn't too bad.  See you Saturday!  Jodi and I are in sync in this pic, we all thought it looked kind of cool