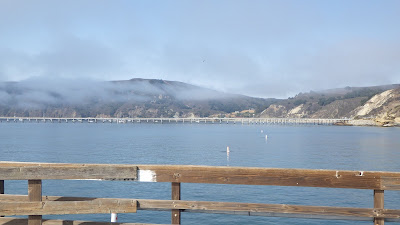 At 10:30 this morning Avila Beach was a sunny hole in a ring of fog and clouds. It was 65° with a coolish breeze that was full of moisture that made me reach for my sweatshirt. The water temperature was 58°.  The surf was mostly 2 foot and the afternoons wind chop was just beginning to build.
Niel, Jodi, Leslie, Duke, Tiki, David, Alex and Adam were ready to swim. Nobody wanted to pick a route so I suggested that we get in the water, swim to the first buoy and figure it out from there. 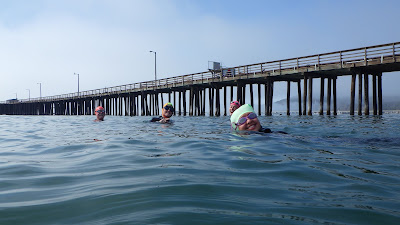 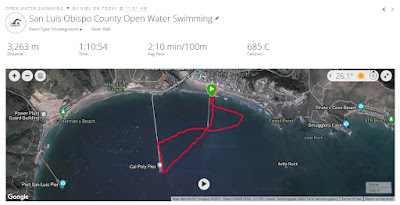 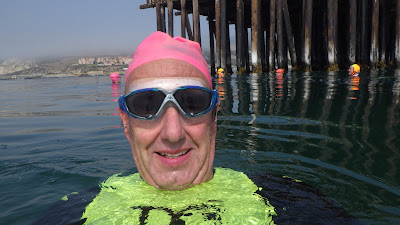 Leslie, Niel, Jodi, Duke and David at the end of the Avila Pier. This was the flattest water we would see during the entire swim. The water clarity was best here. Over at the CP Pier the water was more green and opaque.
Late breaking news provided by T. Lorish, Cub Reporter:
The first group in today was Paula Dooley and the SLO Masters, followed by Maria and Heidi, then Tom followed by a group of 4 fast guys who nobody identified. That makes the Dolphins the fifth group in the water Sunday morning.
Duke and I will be back at 8 on Tuesday.
niel