It was sunny at our house in San Luis Obispo when I left for the beach but within a few miles I ran into thick fog on Tank Farm Road. Avila Beach was a grey closet. Except for the start of the pier there was nothing to see. 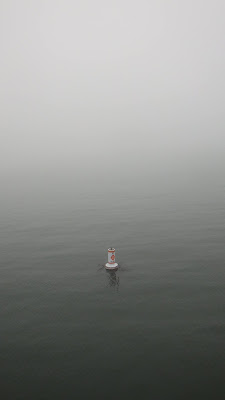 From the Avila Pier looking East. 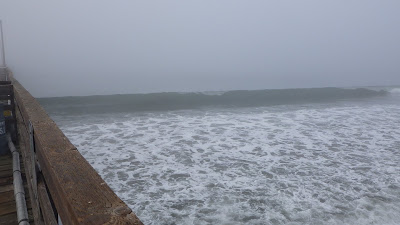 The visibility on the west side of the pier was better and by the time we got in there was sun over at the base of the Cap Poly Pier, so
Niel, Leslie and Jodi got in on the west side of the pier and swam buoy to buoy to the 4th buoy where we found a boat anchored. They were going to be officiating a Pale Kai outrigger race, the start of which was delayed by the fog. We could see the second cross beams on the CP Pier so we swam over there, out to the end of the pier and back the way we had come. On the return we could not see the Avila Pier or beach from the second cross bars but if we kept the sun on our right shoulders we would hit either the beach or the pier so we waved to the otters in the kelp and started off. At about half of the was back we could see the same boat still waiting for the race to start so swam to it and then back along the buoy line.
The air temperature had been 48° when we got in and the water was 57.5°. It felt warmer than that to me. 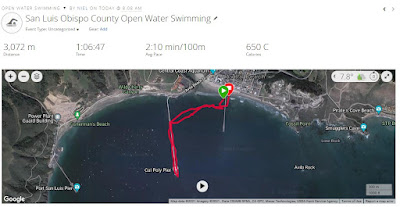 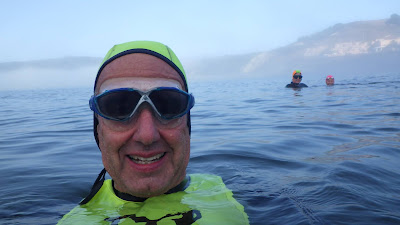 Niel, Jodi and Leslie near the 4th buoy before heading over to the CP Pier.
Tom Lorish was out there today. I think I saw the blue arms (farmer john and blue long sleeve rash guard) backstroking along the buoy line.
Rob had come down to the beach so he and I had a chance to do some catching up.  He is in escrow on a house and things seem to be going well for him in Homer, AK.
Duke, Niel, Jodi et al in the water at 11 tomorrow.
niel