Labor Day Swim and Potluck
It was mellower at the beach today with smaller crowds and cooler at 78°F when I arrived at 11 and in the low 80's at 1. There was no wind so the ocean was flat and warmer. I measured water temperatures between 16°C/ 61°F and 18°C/64.5°F. The red tide was much worse than yesterday. The only bait ball I saw was way off shore on the left side of the pier but there was a lot of unorganized bird feeding closer. 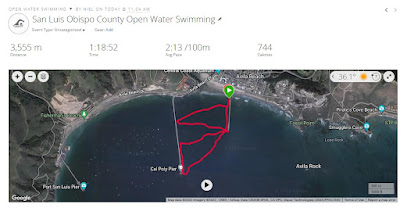 I decided to swim between the Avila and Cal Poly Piers to stay away from the birds and to look for cleaner water than it was near the shore.  The water was somewhat cleaner near the end of the Cal Poly Pier but that was dirtier still than the bad spots yesterday. At 1:30 when I was leaving the waves were bronze colored. 😝 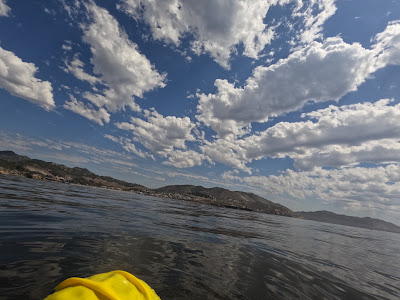 Looking back toward the Avila Pier from the end of the CPP.
After swimming Jodi, Peter and I had the Yacht Club all to ourselves for food, treats and swimming war stories.
Just weekends from now on for the lifeguards. Not sure when they quit completely for the season.

If the water isn't too dirty I'll get in tomorrow at 7 for an easy wind down swim.

I'll be swimming at 9 on Thursday.