Everything was excellent at Avila Beach this morning except that the late summer red tide has shown up. YUCH!
Today's numbers were 57°F air and 16°C/60.8°F water.  Small waves, flat water and a nice sunrise.
I've been keeping my routes limited to around the Avila Pier. The sharky signs are not up now but this is the time of the year when the big gray fish are more common around on the Central Coast so I'm staying closer to the beach. Today's route was a variation of the big triangle route that takes in the swim buoy lines and the end of the Avila Pier. Today's route was to start at the first buoy near the pier. go out and back along the buoys on that side, swim out around the pier to the first buoy on the opposite side, then out and back along that swim buoy line and back around the pier to the starting point. Repeat twice. I figured that this route would be a bit longer than two regular triangles, which is 3200M, with a bit extra for swimming around the pier, so maybe 4000M. 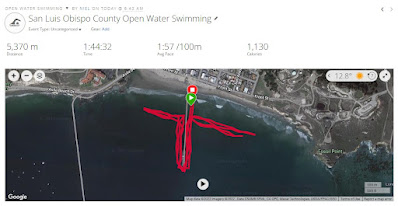 So I'm a bit of a swimming doofus having done 3.33 miles, not the 2.5 miles I expected.
What? It is not as if I swam an whole extra mile....
When I was at the showers Duke walked up to say hi. He was wearing a farmer john wetsuit with cap and goggles. Turns out this was to be his 'I'm pissed about having my surgery rescheduled until December and since I'm already full of steroids and feeling pretty good I'm not sitting on my butt until then' back in the water U Burner Swim. 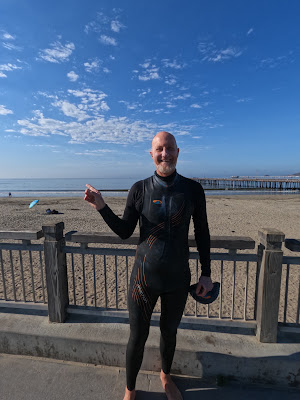 After showering I met Tom on the Front St. sidewalk. He is pointing to Duke out in the water.
Tom got in and swam out to give Duke a high 5. 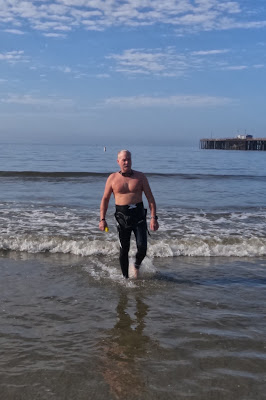 Duke getting out.
It was great to see Duke and Tom today.
I'm planning on swimming Saturday morning at 7 and Sunday and Monday at 11.
niel