There were wonderful clouds at Avila Beach today. I could feel that a storm was coming but it was 71° with a pretty flat ocean, small waves and very little wind so it was a nice summer day with a change in the weather on the way. It was also after Labor Day and there might have been two dozen people on the beach east of the pier.  It was really calm and nice. 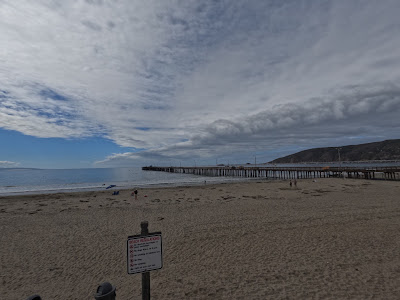 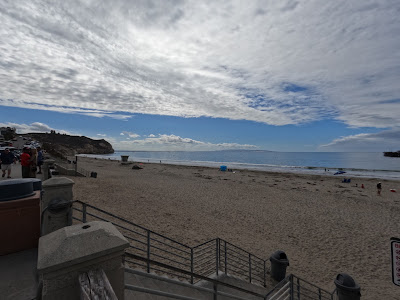 David was here and Drina, who swam with us about 5 years ago and was back for another go at the ocean. She would swim the buoy line while Pat and I were going to head over to the Cal Poly Pier, see how the red tide was distributed today and plan on changing course if it was required by deteriorating water conditions.
As we were getting ready the ocean began changing rapidly.  A very short period swell out of the south began building rapidly. The swell looked like a one to two foot chop with a 3 second period but there was no wind and it wasn't breaking, so we think that this was the waves from a storm that was close but was not yet present. I don't think that I have seen this many pelicans in Avila Beach before. There were enough to perch on the railings on both sides of the Avila Pier from near the shore to the end. Probably hundreds of birds. They were alternatively perching or feeding in an area that was even with the end of the Avila Pier and half way along the east buoy line which moved to the NE until it was in the surf zone near the big rock. 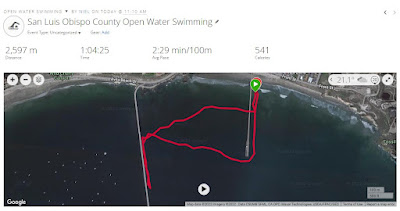 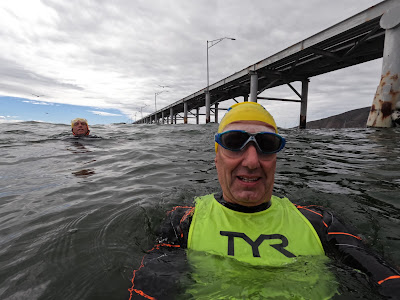 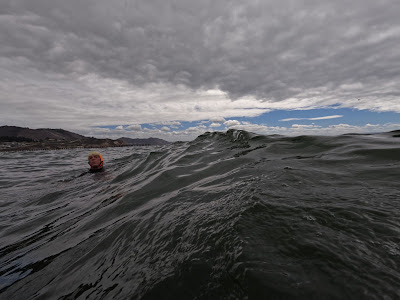 I'm not sure how to judge this wave but I'd say that they were now 3 feet plus with a 3 to 5 seconds period.
We decided to swim over to the end of the Avila Pier. I thought that this leg was much more difficult than going out along the CPP. Swimming across this swell was more like gymnastics.  We got to the end of the Avila Pier, decided that we were done and turned left towards the beach.
I'll swim Tuesday morning at 7 and be out of town until the following week.
niel
Posted by Niel at 4:19 PM