Teresa, Niel and Tom slipped into the water this morning at 9:30 and swam a lap around Avila Rock off of Fossil Point.  We had been talking about doing this swim for a while and were waiting for the water temperature to come up to where a 1.75 to 2 mile swim would be comfortable. I was comfortable the entire time so I'd say the water temperature today was 55 to 57 degrees. A wind was starting to pick up but we were early enough to be out of the water before it became a problem. Other than that little chop the water was flat with 2 to 3 foot surf and a 2 to 3 foot swell. The water was nice and clean and the swimming was wonderful.

We began by swimming along the east side of the buoy line. We met up at the 4th buoy to make sure everyone was happy with the conditions for the route we had planned before heading offshore. 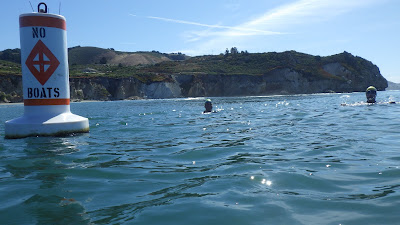 Teresa and Tom at the 4th buoy. They are both much faster than I am so this would be the last time I spoke to them until after we were done. 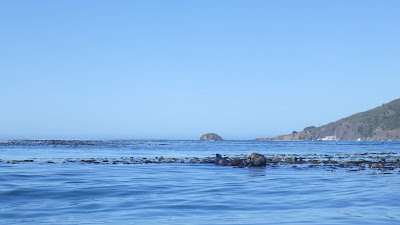 There was enough swell that I needed to stop a few times to plot
my way through the kelp beds on the north side of the rock.
This guy was busy having breakfast and didn't pay me any mind. 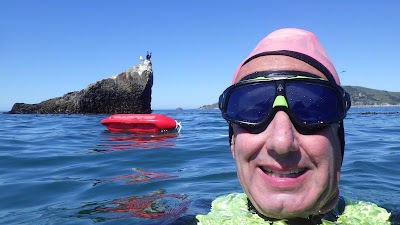 A selfie at the rock. The rock is far enough offshore to have more boat traffic then the more common spots on our routes and I expected us to be split up, so I towed my rescue can for both the extra visibility and just in case someone wanted to take a break.

This turned out to be a perfect day for this swim.

And another bonus, Tom is tasked with distributing Leslie's surplus baked goods, so today's treat was carrot cake muffins.  Yummy!