The weather was overcast and cooling with a hint of wind. The water looked nice and clean with small waves and fairly flat. Tom was getting out as I arrived. He estimated the water temperature as 54 ish. The conditions on Front Street and the beach were pre-pandemic; crowded with lots of groups of people and no one wearing any protection. While there was zero conception of maintaining safe distances by the crowd on Front Street, it was easy to make something work on the beach.
This was the beach at 10:30: 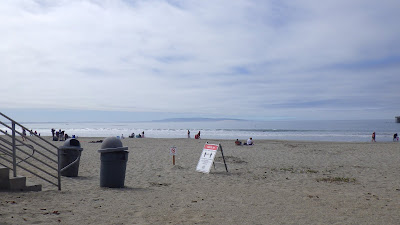 Niel, Teresa and David showed up to swim at 11. I had planned a long route for today that I could do on my own if necessary. David and Teresa liked the idea of 2 to 2.5 miles so that is what we did.

Out to the end of the Avila Pier, two clockwise triangles and back in along the pier.
This route could have been a bit boring except for the wind and current that showed up to make the swim entertaining. 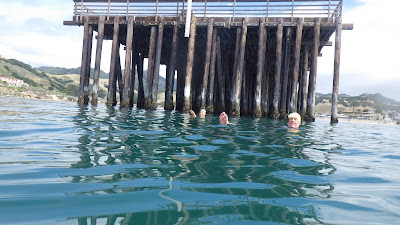 Teresa and David at the end of the Avila Pier for the first time. 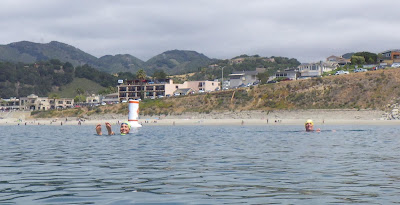 Teresa and David the the last buoy on the east side of the pier,
3/4 of the way into the first lap. From here to the end of the Avila Pier we has a strong SW current and chop to make things interesting.
Teresa was starting to get cold and went off of the front. David hung with me. 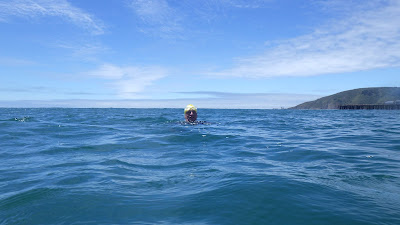 David at the end of the Avila Pier for the third time. 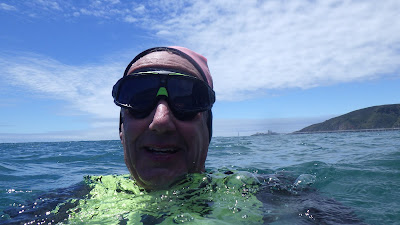 Niel at the same spot.

I had 3020M on my watch when I stood up (after going over the falls on a wave), good in my book for 2.5 miles with consideration for the extra work required for the last 1.25 miles. The chop was never really troublesome, but make this swim an uphill slog for most of the way. 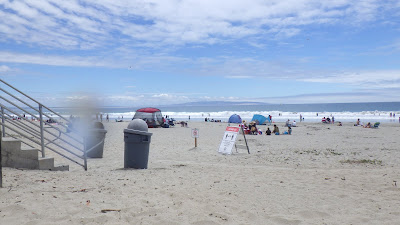 The beach at 1, looking like a regular summer's day.

Tom and I are talking about swimming extra early this coming Saturday and Sunday to beat the holiday crowds.