Tom, Niel and Dave swam today at 9:30. Yesterday's storm had moved on leaving flatter water conditions. The surface was slightly textured with no wind, chop or swell. There were some 4+'  waves that would show up occasionally. The water temperature was the same as yesterday, probably 55 to 57. Today's route was a variation of yesterdays with some extra distance thrown in at the end; from the first buoy on the west side of the Avila Pier to the 3rd crossbars on the Cal Poly Pier, to the end of the Avila Pier, to the 2nd crossbars, to the 4th buoy at the creek mouth and along the buoy line, under the pier to the east end of the buoys and back to our starting place for 3,807M. Tom was  off the front and I think that he went from the last buoy on the east to the end of the Avila Pier and in along the4 pier. That would have been an additional 350M for 4,157M. 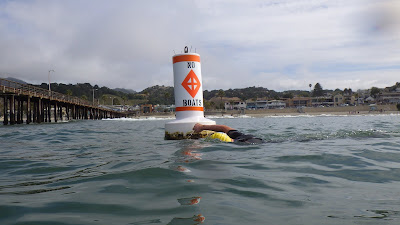 At the start. Tom at the first buoy on the east side of the Avila Pier. 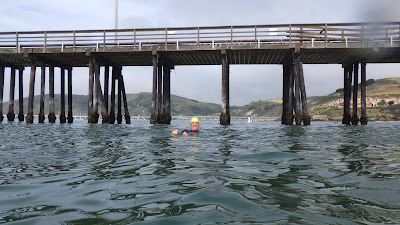 David at the same spot.

I was fussing with my goggles for the first half of the swim and didn't get more photos.