Commiting to the Big Pool-

I've accepted that my community pool isn't coming back any time soon and when it does it will probably be short course, every other lane, waiting to get in and no locker rooms. Poohie! So I've committed to swimming at Avila four days a week.  It is much more time consuming but I already feel so much better. Tom and I are thinking alike and can make a morning time work so there are two to four of us in the water. My challenge is to see if I can get back to my pool distance of 3200 to 4000M in the ocean.


It was very nice in Avila Beach this morning; patchy clouds, no wind, a big southerly swell making some 4 to 5' waves. The water has been as clear as it gets on the Central Coast. I met up with Tom and Leslie. Tom wanted to do the route that I had done Sunday for 3920M. That plan got a little shaky as we waded in and found the water temperature to be a couple of clicks colder than it was on Sunday, so we planned to drop off the full plan if it was too cold.

Tom and I did the full Monte, somehow getting 3765M instead of the 3920M for the same route on Sunday. It was quite choppy Sunday so maybe my GPS included the vertical distance? ;-) Leslie got cold and dropped off halfway around the second lap. 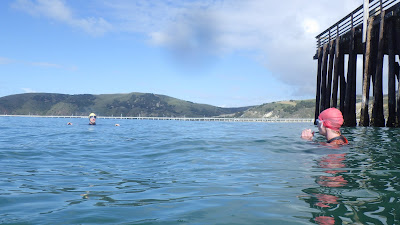 Tom and Leslie at the end of the Avila Pier for the first time.