Avila Beach was flat, calm and beautiful this morning. Some 3' waves but no current, fog or swell and nice clear water.
A lot of variation in water temperature today. on the east side of the pier I'd say 53-54 until we got out towards the point and then it was 55+. That temperature was pretty even until I came back under the pier from the west and met a 3 degree drop right at the pilings. 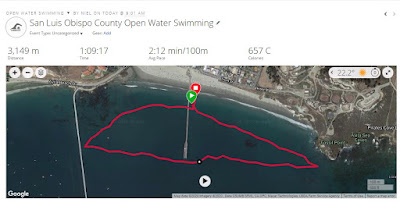 Tom wanted to go to the end of the buoy line on the left and on to a spot between Fossil Point and Avila Rock, then to the end of the Avila Pier, to the last buoy at the creek and back along the buoy line. That would be about 1.5 miles. I opted to swim over to the second cross beams on the Cal Poly Pier and then over to and back along the buoys on the west side to our starting point in the east side of the pier.  I had 3,149M when I stood up. 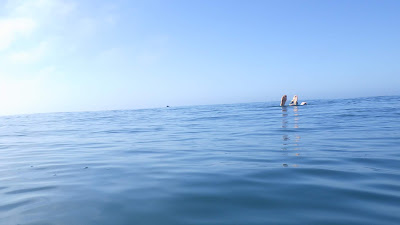 Tom making like an otter off of Fossil Point. 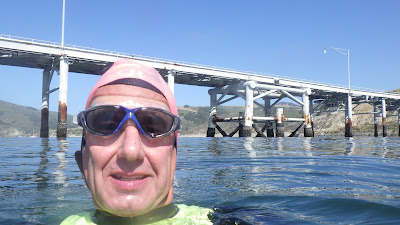 Me at the second set of cross beams on the Cal Poly Pier.

We didn't see Hillary but she got in not long after us. Don't know her route but she did make it over to the CP Pier.  She found a lost beach toy way off shore. See her GoPro video.

I was nervous that I was about to find something I didn't want to find. Alas, I towed it to shore and disposed of it properly. My flotilla was amazing.