Niel, Tom and Hillary swam Saturday morning, getting in the water at 9:30. The holiday weekend crowd was already showing up. I proposed swimming the buoy line to the left to the 4th buoy, to the end of the Avlia Pier, to the third set of crossbars on the Cal Poly Pier and to double back to our starting point. I was looking to do 3200M. The water was smooth, clear and cold, I'd estimate 53 degrees and the overcast wasn't helping any. Once we got to the end of the Avila Pier, Tom Of The Sleeveless Wetsuit, went off the front because of the cold. He got out when he returned to the first buoy. That was going to be less than 3200 for me so I convinced Hillary to join me and go under the pier to the last buoy at the creek and back for 3,780M. 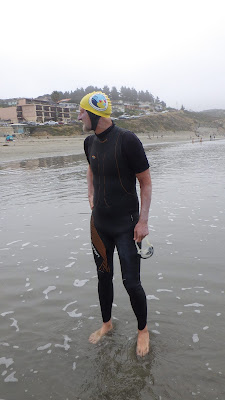 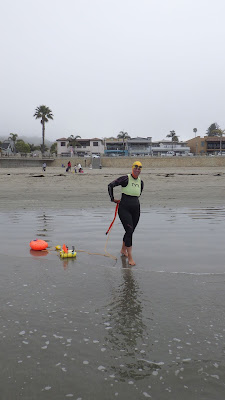 Hillary getting in.
She tows a yellow Avila Dolphins party boat with her GoPro
and an orange bladder with water to keep hydrated. 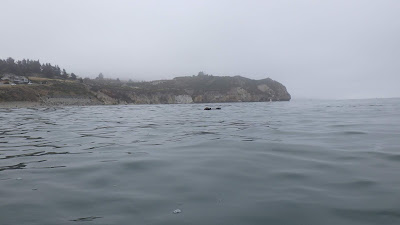 This guy was having a snack at the first buoy.
I popped my head up when I stopped at the buoy and he was 20' away.
This was taken with no zoom and he was not the least bit concerned.
I wonder it it was the same otter that I saw near the Avila Rock a week ago. 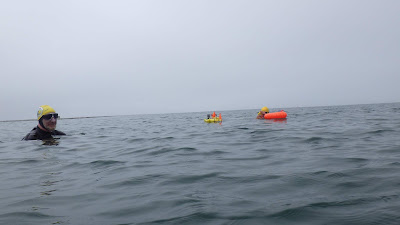 Tom and Hillary at the 4th buoy 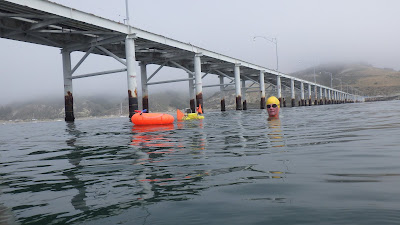 Hillary over at the Cal Poly Pier. 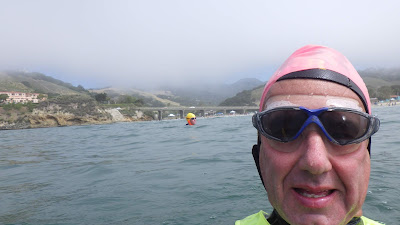 Hillary and Niel at the last buoy at the mouth of San Luis Creek.
We were just starting to get some sun at 10:45.

I'll be getting in at 9:30 instead of the usual 11 tomorrow in order to beat the holiday crowds.