There was clearing fog and a building SW breeze this morning. I was on my own since Tom had work stuff to do that he could not dodge. The pleasant surprise was that the change in the wind the water temperature had popped up. We will not have any thermometer readings until the pier is opened and I can get out over some deep water but the lack of an initial  shock and becoming comfortable by the time I was out to the first buoy puts my estimate at 55 to 57 degrees. The water is still clear but the wind that was blowing away the fog was putting some chop and current on the surface of the water. I got in at 9 and swam for an hour.
I ran into Phil Costino at the showers.

I had an odd Garmin malfunction this morning.
I'm guessing that it lost its GPS sync since it kept time but recorded only 40 M of distance.
I swam out to the first buoy, left to the 4th buoy, to the end of the Avila Pier. over to the 3rd crossbars on the Cal Poly Pier, in along the CP Pier to the second crossbars, over past the kelp to the 4th buoy at the creek mouth and east along the buoys to my starting place. 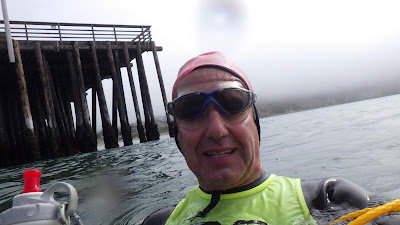 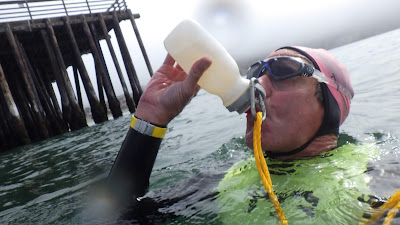 With the longer distances in colder temperatures I'm following Hillary's lead have begun hauling along a bottle of sports drink for energy and hydration. So I now have three things hanging from my belt: car key, camera and the tow line. 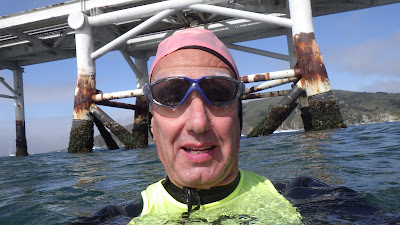 At the third crossbars 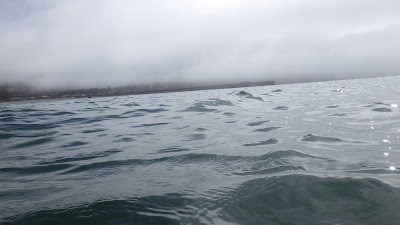 Looking back to the Avila Pier and the fog. 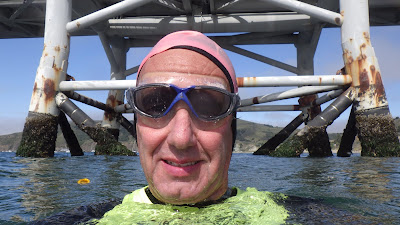 At the second crossbars. 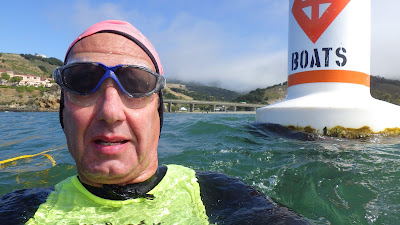 And at the 4th buoy at the creek mouth.
The mouth of San Luis Obispo Creek is under the bridge in the background. 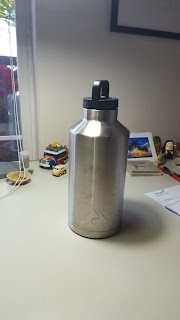 Several years ago my wife gave me a 64 oz. Hydro Flask to use to take hot water from home to the beach for a hot rinse after a swim. It worked great. I had been using a 1 gal. Arizona Iced Tea bottle, which was free and worked OK, but the plastic bottle didn't keep the water very warm. The Hydro Flask was less bulky and seemed to keep the water as hot as when it came out of the tap, at least until Saturday on this past Memorial Day Weekend when I left the Hydro Flask at the showers at the beach. It was long gone when I realized it was missing.  Bummer!
Looking for a replacement on line I found that the Hydro Flask is a $55 item. An even bigger bummer! I browsed around and found this one on the WalMart website. It was $15 and didn't come in cute colors, just stainless steel or white. I gave it a try and today was my new bottle's first trial. It worked great. It is about 2 to  2 1/2 hours from when the bottle is filled until I am at the showers and the water was as hot as I could want. I'm not sure that the Ozark Trail is made as well as the Hydro Flask, it has a separate piece that forms the bottom of the bottle so there is a additional seam there, so if it is dropped and dented it may leak it's vacuum and no longer insulate, but it comes with a cap with a handle, which I had to buy separately for the Hydro Flask.  My evaluation is that it will work just as well, not be a major loss if I lose it and I have $40 left over for coffee and brownies after I swim.