The Fog Route-
I arrived at Avila Beach a little after 9. The air temp was about 60 with fog and low clouds. There was no wind and the water looked very clear. The water temperature was about the same as yesterday but with the overcast and lack of sun it would feel one or two degrees colder. Since the pier is closed I have to wade out with the thermometer to get a good water temperature. I went out after our swim and got a 54 in the surf line.
The Tom and I planned to get in at 9:30.  Hillary and David were already in the water. Tom and I crossed paths with them along the east side of the buoy line but I don't know what their route was. Tom and I did a good visibility route, sticking to the buoy line and close to the pier, both for navigation and safety. We could always see the next buoy and 3/4's of the way through the swim the sun started coming out and visibility improved. One of the scariest things for me would be to be out in the water with poor visibility like this morning and hearing a boat somewhere close. 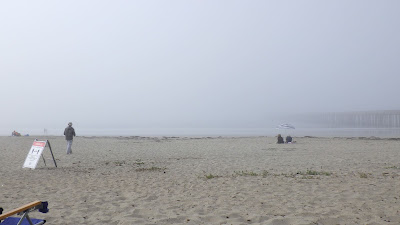 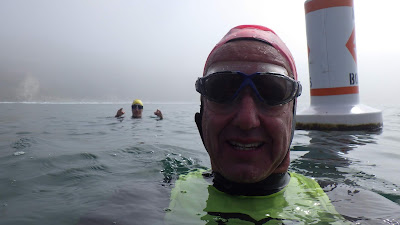 Tom and Niel at the 4th buoy on the east side.
It was cold enough that after this photo op we just kept swimming.

Brittany and Augustine go in at 11.

This coming week Tom and I will be getting in at 9:30 on Tuesday and Thursday and will adjust our get in time for Saturday depending on the probable presence of lack of crowds.

Yesterday and today it was possible to be safe on the beach and to sit out while maintaining good distancing, but the Front Street boardwalk was jammed with people who were behaving like it was the summer of 2019, NOBODY wearing a mask or paying attention to maintaining safe distances. The route from my car to and from the beach was a constant recalculation of which path was safe, which often took me out into the street.
If the crowds continue like today's I will continue to come earlier that was customary, maybe even getting in as early as 7, in order to stay safe on dry land.