Tom's Welcome Back In The Water Swim 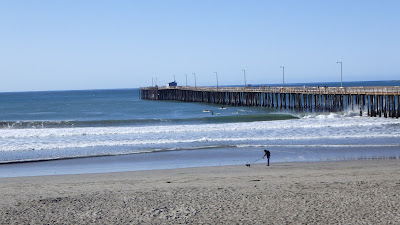 It is the first day of spring, the lifeguard stations are back in their summer spots on the beach, the buoy that marks the reef on the left side of the beach has been replaced (it was carried away in an early winter storm) and the lifeguards have begun their training. 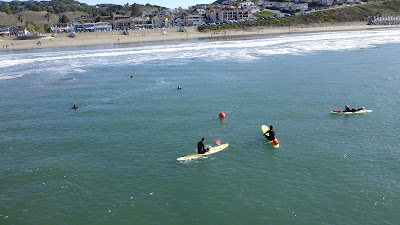 At 10 o'clock it was sunny and 55° with a gusty offshore wind. There was wind chop on the water and 6 foot sets of waves. The water temperature was an almost tropical feeling 50° after 48° on Tuesday and 47° on Thursday. 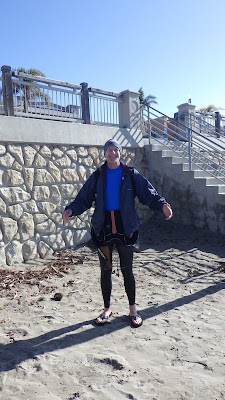 Duke and I were here at 10 to welcome Tom Lorish back into the ocean. Tom has been swimming with us for many years but for the past five months has only been able to swim in the pool, so today was to be his reincarnation as a ocean swimmer. 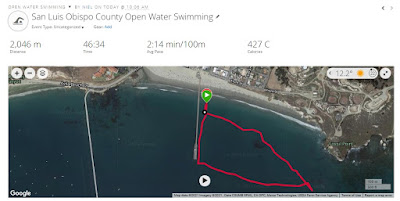 We decided to not go too long so our course was out to the end of the pier, parallel to the beach until we were off of Fossil Point and then back to our starting point. 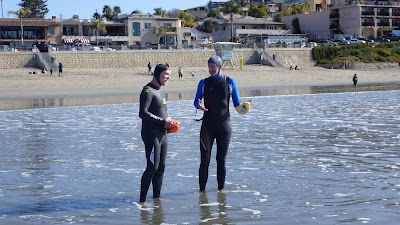 Duke and Tom getting in.
Getting out through the sets was some work. I got pushed back once when I thought that the set was going down after three big waves and I started to push out  only to find that there were four even larger waves in the set. Tom totally committed at that point and I saw his legs disappear as he punched through the curling lip of a 6 foot breaker. That is great fun as long as you don't get a ride over the falls. 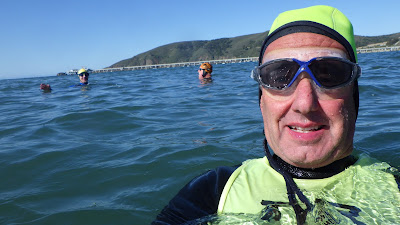 Tom, Duke and Niel out at the end of the Avila Pier. You can't tell in this photo but the wind chop was breaking. It didn't look rough from shore but looking back there was a lot of whitecaps on the water.
Our swim down to the point was a lot of work with the chop on my left shoulder at 90° to our direction, pushing the whole time and trying to not swallow much water. From the point in towards the beach we were heading more directly into the chop so it was harder but less complicated swimming. Once we got near the beach the chop laid down and the last few hundred meters was nice.
I'll swim tomorrow morning at 8.
niel