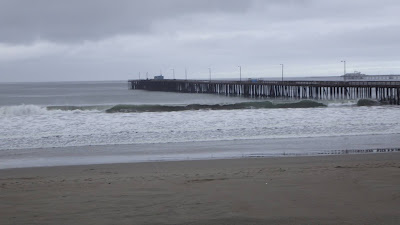 We had some mild winter weather at Avila Beach today. The air temperature was 53 degrees with solid overcast and light drizzle. There is a word in French for this very light rain that translates as 'spitting'. I used to hear it in English as well.
The  surf was up to 6+ feet with 3 foot sets in between. Stephanie, Theresa, Grace, Jodi and Niel decided to first get out to the end of the Avila Pier and then finalize a route. Getting out was on the edge for me but we all did fine and had fun.  The water felt warmer than Thursday without the edge that it had in the upper 40's. I measured a sea water temperature of 51 degrees at the second crossbars on the Cal Poly Pier. After the last three weeks of 48 and 49 degrees 51 felt surprisingly comfortable. 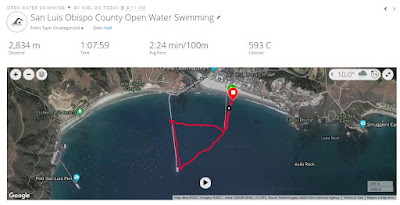 The plan was to go to the second crossbars on the Cal Poly Pier, swim along the pier to the end and then come back to the end of the Avila Pier.  Grace and Theresa added a leg to the end of the buoy line and back parallel to the beach to our getting in point. 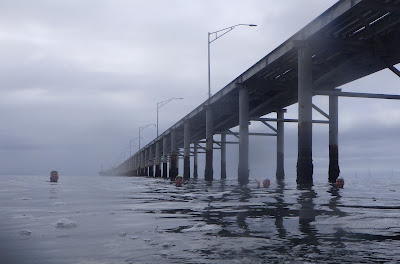 Stephanie, Jodi, Grace and Theresa at the second crossbars on the Cal Poly Pier.
It is about 600M to the end of the pier from here. 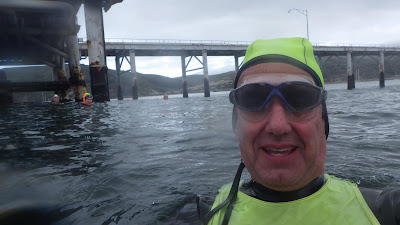 Theresa, Grace Jodi, Niel with Stephanie behind me at the end of the Cal Poly Pier.
We will swim tomorrow at 8 AM.
If the water temperature stays in the 50's we'll plan a 2.4 mile swim for next weekend.
niel