Playing Marco Polo In The Fog

Avila Beach was nice and sunny hole in the fog this morning with an air temperature of 39° and a water temperature of 50°. The surf was knee high and the surface was glassy but rippled. There was patchy fog which at 8AM was holding well offshore so all of the local features on the water were well clearly visible. Niel, Tom I., Stephanie, Jodi and Duke were ready to swim. I wanted to do about 3000M on a route that was a little different so I proposed that we swim to the second crossbars on the Poly Pier, then to the end of the Avila Pier, from there to the end of the Poly Pier and back to the end of the Avila Pier and in. 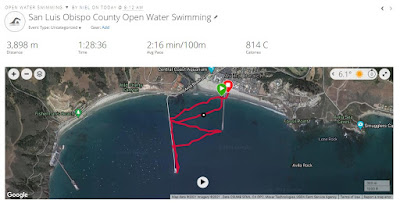 The water gods had other plans for us. 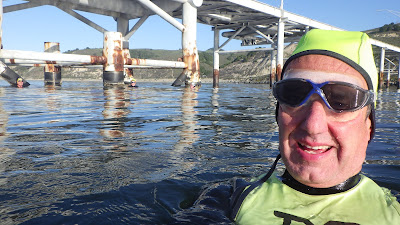 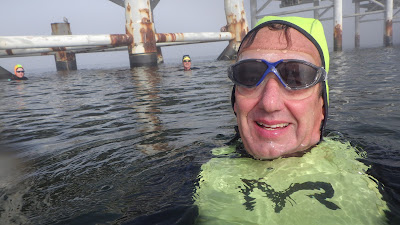 At the second crossbars for the second time in the fog.
I missed Stephanie again off to the left of the frame, then Jodi, Tom and Niel.
From this point we were well within the end of the Avila Pier so we took a bearing on the fog and headed for the base of the Avila Pier. We stuck together and swimming directly to the base of the pier.  We swam 3900M.
I'll not be swimming this coming Tuesday or Thursday. I'm a possibility for Saturday and definitly will be back at the beach next Sunday.
niel
Posted by Niel at 11:50 AM