There was a nice group today for a cold and bumpy swim. The wind was up and blowing offshore before 8 so conditions were going to get bumpier as the morning progressed. At 8 the air temperature was 40° and the water was 49°. The water being warmer than the air was not much of a joy. The surf was down since yesterday and getting in would be pretty easy. Swimming this morning were Stephanie, Jodi, Theresa, Leslie, Tom Israel (yesterday's Tom was Tom Lorish) and Niel. Some swimmers were concerned about getting cold and needing to get out so we planned on doing two triangles because that route stayed close to the beach. 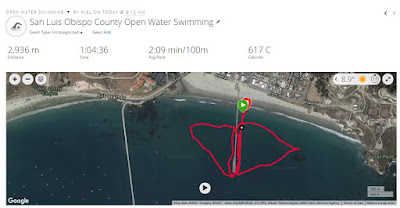 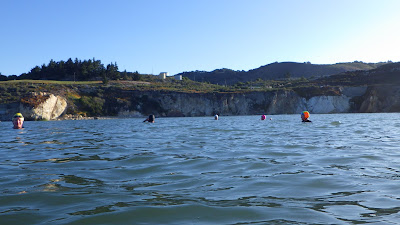 Stephanie, Tom, Theresa, Leslie and Jodi at the eastern end of the beach at the big rock.
Nobody felt like waiting for the slower swimmers at this temperature so we got split up. Jodi and I did the two triangles.
I'll swim Tuesday at 8 and Thursday at 8:45.
niel