Niel and Duke enjoyed flat water, for a while, small surf and sunny skies this morning. The air temperature was 43° and the water was 49°.  We got in at 8 and managed to wade out past where the small surf was breaking before we started swimming. That was a very mellow start to a nice swim. 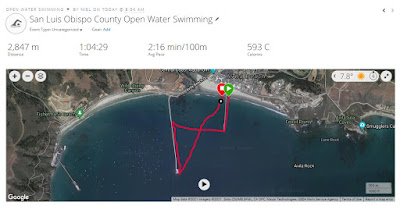 Our route would take us to the end of the Avila Pier, over to the second crossbars on the Cal Poly Pier, along the pier to its end and from there swim the 1000M back to the beach on the west side of the Avila Pier. 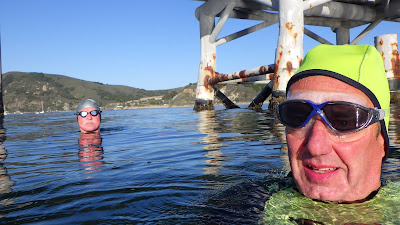 Duke and Niel at the second crossbars.
It has not been this glassy in a while. 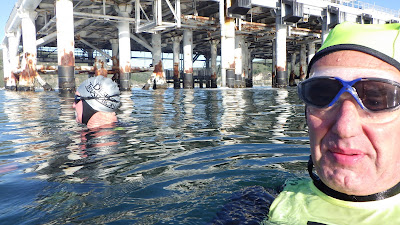 Duke and Niel at the end of the Cal Poly Pier.
The wind has picked up and though it doesn't show in the photo, the leg back to the beach had us pushing into a current and small chop. I was having one of those weird days where my body was swimming strong but my head was not into it. I had to keep doing things to keep myself from focusing on how long the swim back to the beach seemed.
After getting out we felt like we had put a great start to the day.
Duke, Theresa and I will swim at 8:30 on Thursday.
niel