Summer -
At 10:30 it was 76° in Avila Beach with no wind or clouds. If felt like it was going to be warm unless the wind came up. The water was still 52°. If the offshore wind holds off in this coming week I'm hoping the water temperature will creep up to say 54° or 55°. The surf was 2 to 3 foot.
Jodi and I planned a route that would celebrate the return of the Swim Zone buoys. With the lifeguards and now the buoys back, Avila Beach looks ready for summer. 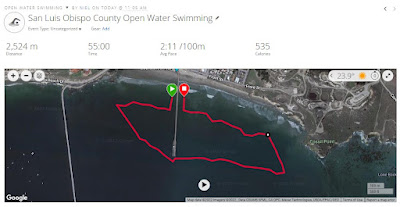 We swam down a real line of swim zone buoys past the creek mouth, to the end of the pier, over to Fossil Point and angled back in to line up with the buoys and swim along them to the pier. 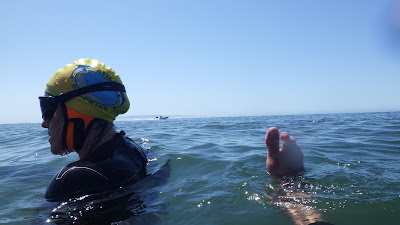 Jodi and I hung at the end of the Avila Pier to
give this boat with day fishermen a wide clearance.
There were some real cold spots out there today, several degrees colder than the rest of the water. The end of the pier was one of them. The temperature was the same as the rest of the water at the surface but much colder at my feet. It was a relief to lift my feet up out of the water. Inshore of the reef buoy was another cold spot. The swell must have been pulling up water from the bottom when it broke over the reef. 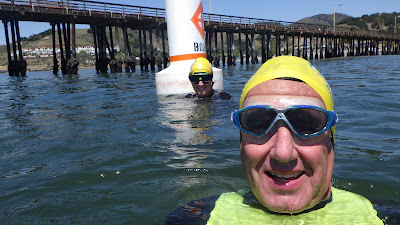 Jodi and Niel at the first buoy on the left side of the pier.
The wind had not gotten into Avila when I was leaving at 12:45 and the thermometer in my car said 90°.  There was a nice breeze in SLO and it was 74°.
I'll be back Tuesday morning at 8.
Jodi will be back to swim on Saturday and then off to Maui for 10 days.
Gear Tip - I'm swimming in the ocean four times a week and a salt crust had built up around the buttons of my Garmin watch. They had all gotten sticky with the UP button, the one at 8 o'clock, just about refusing to work. I soaked my watch in warm tap water for 15 minutes and hit the areas around the buttons with an old toothbrush and it is now fully functional.  😃👏
niel