At 10:30 Avila Beach was sunny with surprisingly little wind. There had been much more wind in SLO. The ari temperature was 63° and still rising. It was blowing out to the west somewhere because there was a chop on the water from the SW. The water temperature was 59° but felt more comfortable than under cloudy skies. Niel and David swam a couple of big triangles which let us try eight different water conditions.  The chop was not large enough to slap me around and mess with my stroke but the current was strong enough to require a persistent correction into the push. 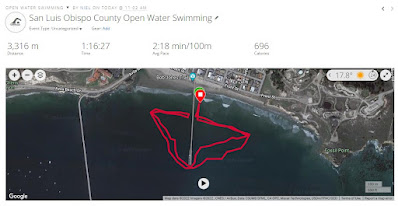 In some places the water still has a reddish tinge. The wind seems to have pushed all of yesterday's loose floating kelp on to the beach. 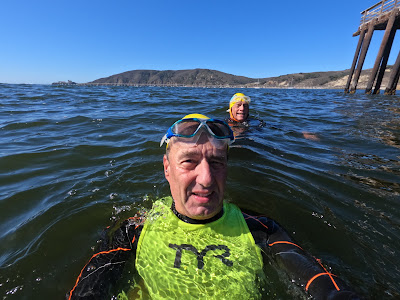 I'll be back on Tuesday at 7 AM. It's kinda dark but the sunrises have been beautiful and I have a mid-day meeting and want to get my swim in.
niel
Posted by Niel at 4:19 PM