Today, right on schedule, we had fall conditions. AT 10:30 the air temperature was 60°, it was overcast with a light breeze out of the NW and a small wind chop from the SW. The water temperature was 59° and there were some patches of reddish brown water, but the majority of the ocean was nice and clean and beautiful to swim in.
Swimming today were Niel, David and Tim. Tim and his family were visiting from the bay area. He usually swims at the Aquatic Park in San Francisco and he was looking to get in the ocean while he was here. I had been looking for a day to go around Avila Rock and today was going to be it. David had never been out to the rock and he was up for a bit of an adventure. Tim was comfortable staying along the buoy line. There was a bait ball way out there in line with the middle of the buoy line that didn't concern us. There were also a couple of big orange triangle buoys that marked the course for a regatta. In order to stay well away from the boats we decided to head to the rock from the end of the buoy line instead of the end of the pier which would keep us tighter in to the shore.
We got in, turned left at the first buoy and met up at the 4th buoy. Tim headed back along the buoy line and David and I headed to Avila Rock.  2/3's of the way to the rock the wind had driven the bait ball almost too us. Fortunately it was behind us and we continued to the rock without needing to work around it. 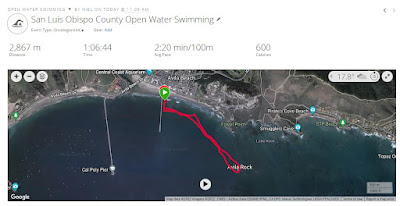 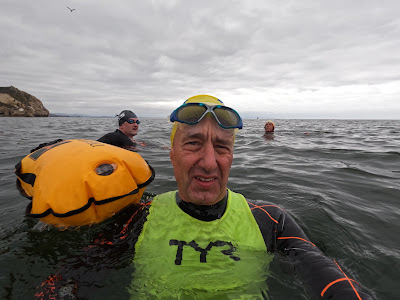 Tim, Niel and David at the forth buoy 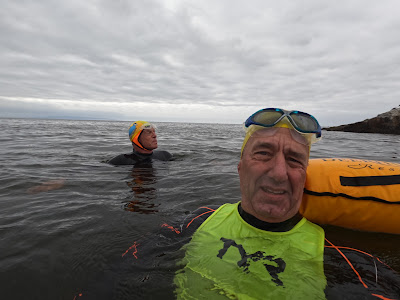 David and Niel with Avila Rock in the background.
The tide was high and it is late in the season so there was much less kepl to swim through near the rock.  The chop was just enough to make it feel real like the ocean but not enough to be bothersome.
Tom swam this morning. The water was nice and clean enough that he could see a seal looping under him.
It was just a seal, right Tom?
I'm going to have the meniscus in my right knee trimmed up on Tuesday so I'll be beached for about two weeks until the incisions are completely healed.  I'll post whatever swim reports are sent to me while I'm in drydock.
niel