There was some thin to thick high clouds, a strengthening breeze and 2 to 3 foot surf in Avila Beach at 9AM. Niel, Tom, David, Stephanie and Theresa were going to swim. The air temperature was 54 degrees and the water was 51 degrees and clear. A start along the beach to the end of the seawall would start us off. Then to the end of the Avila Pier, over to and along the Cal Poly Pier nad back to our starting point for 3,318 M. 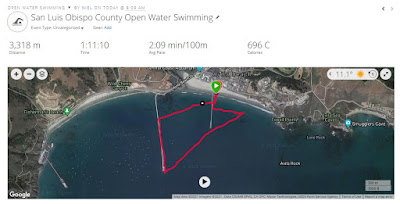 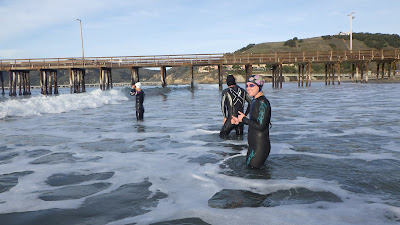 Theresa, Tom with David behind him and Stephanie wading in. 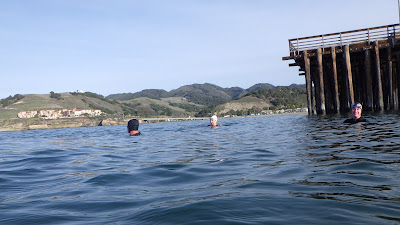 Tom, Theresa and Stephanie at the end of the Avila Pier.
By the time we got out the clouds had thickened and the wind had picked up so it was chilly getting changed and warmed up.  David and Theresa both have those fleece changing ponchos and they looked like a nice idea today.
I be back tomorrow morning at 8 to go again.
niel
Posted by Niel at 12:08 PM

Does your group still go out at 11 am every Sunday? Your website says you do but I see on your blog you are going @ 0800.