It was COLD today.

At 8 this morning Avila Beach was sunny and pleasant with an offshore wind just starting up. The air temperature was 56 degrees, the surf was 3 foot +/- and had a nice break near the pier. The water looks nice and clean.
Duke, Jodi, Theresa, Grace and Niel were ready to swim. Duke suggested that we swim over to the second crossbars on the Cal Poly Pier, do an out and back lap around the pier and return to Avila the way we came. 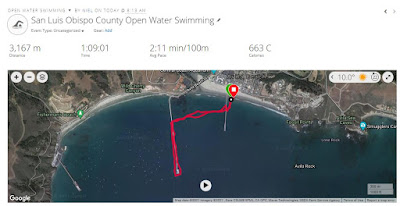 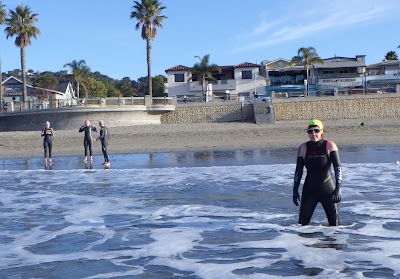 Theresa, Grace, Duke and Jodi getting wet.
The water felt like it was 51 degrees. 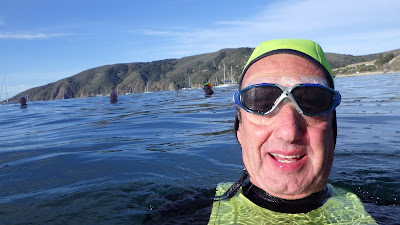 Duke (off to the left), Theresa, Grace, Jodi and Niel at the
second crossbars on the Cal Poly Pier for the first time.
On the way to the C.P. Pier the water temperature dropped. I kept wondering if it was just me, but when I caught up to the group everyone said that it was extra cold. I got a temperature reading at the C.P. Pier of 9.5°C = 49°F, so it wasn't just me. And then there were colder spots on the way to the end of the pier, so that would have been 48°+/-.

My record low water temperature reading at Avila Beach was a 47° many years ago. The low 50's is the usual bottom.

We didn't spend much time hanging about talking but kept moving. The wind had strengthened making the inshore swim along the C.P. Pier a bit of extra work.

We spoke to Leslie at the showers. She had swum by herself down towards Fossil Point and was really cold. She sent this nice picture of the break at Avila. 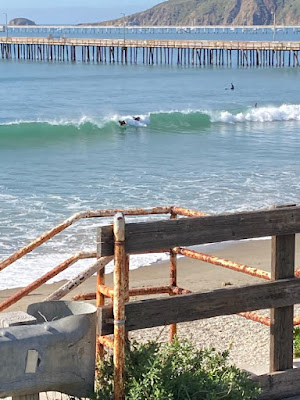 Theresa and Leslie will swim tomorrow morning but I'm not sure at what time.

I'll swim Tuesday morning at 8 and Thursday at 8:30 to 9, depending on how my morning goes.