It was nice and sunny at Avila Beach today with no wind and a flat sea. The waves made it up to 3 feet occasionally and were so mushy that wading out was easy.  the air temperature was 44 and rising quickly and the water was 'up' to 9.5°C/49°F.  Theresa, Stephanie and Niel decided to swim out to the end of the pier before deciding where to swim. Sort of a full body toe test. 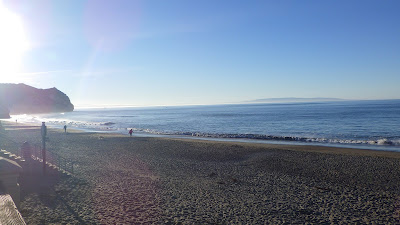 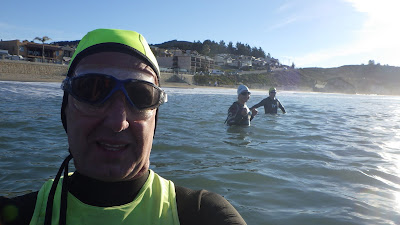 Niel, Theresa, doing the cold water chicken dance, and Stephanie,
not yet feeling the love. 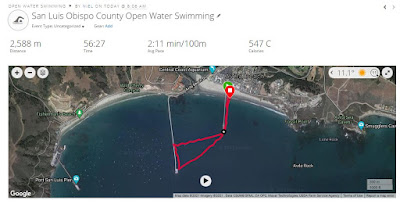 At the end of the Avila Pier we decided to swim over to the third crossbars on the Cal Poly Pier, back to the second crossbars and in. 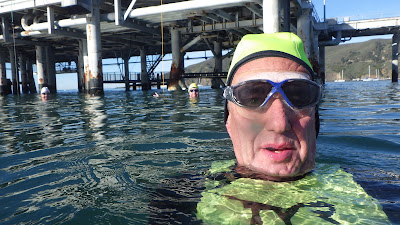 Here we are at the end of the Cal Poly Pier. At the third crossbar we decided that going to the end of the pier was about the same distance and would be more fun.
With the water in the high 40's the first few 100 meters is an extra special experience, which makes it even more impressive that yesterday Theresa and Grace did about a mile bareback!
Theresa said that it was extra cold and that it took her almost all day to warm up. Sure, but for me just imagining what the first few 100 meters would be like is unmanageable and I'm not even tempted to consider it.
Leslie was getting in when we were getting out.
I'll be back on Thursday morning at 8:30 to 8:45.
niel
Posted by Niel at 11:12 AM

Hi there.
I’m a pretty novice swimmer, but have been swimming open water for the past year around the Bay Area. I would love to swim out at Avilla tomorrow, but am not sure what a mile swim looks like there. Would swimming up the small pier and back be a mile? I’m open to other suggestions as well. Thanks for your assistance. Todd