We had a nice group today for a shorter Sunday swim. Duke, Theresa, Leslie, Niel, Jodi and Stephanie were at the beach to get in at 8AM. It was sunny, 48 degrees with the offshore breeze just starting to put a ruffle on the water. Occasionally the surf made it to 3'.

Duke and Leslie would do a shorter swim. Instead of going over to the Cal Poly Pier they went from the end of the Avila Pier to the creek mouth and back to the start. 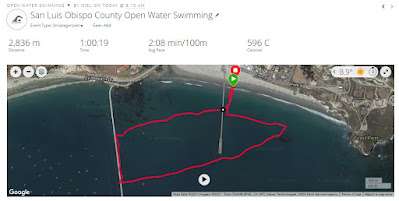 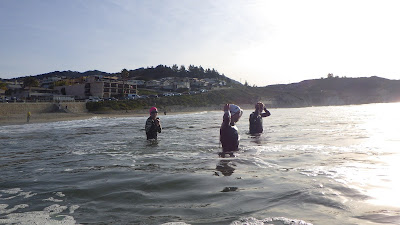 Leslie, Theresa and Duke
Stephanie and Jodi thought the water felt colder than yesterday. I thought that it felt a bit warmer. I measured the same water temperature of 9.5°C/49°F.
Perception is so much of how it feels. 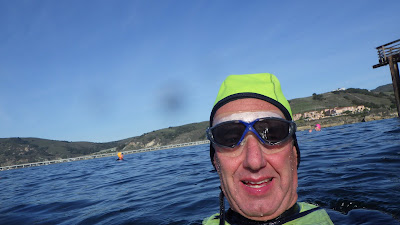 At the end of the Avila Pier.
Theresa is out of the frame to the left, Jodi, Niel and Leslie 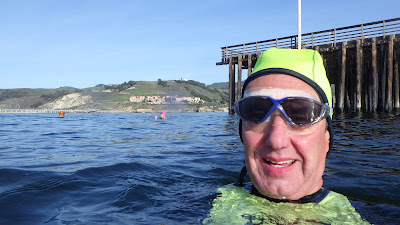 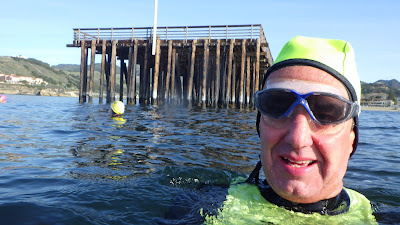 Stephanie and Niel
The combination of flatter water than yesterday and a one hour swim made today an much easier day. I was running out of gas at the end of yesterday's swim. I'll need to bring some nutrition along the next time we do 90 minutes at these temperatures.
I'll be be back on Tuesday at 8 and Thursday at 8:30.
niel
Posted by Niel at 1:53 PM