Deeper Into the 40's

Today's group was Theresa, Jodi, Stephanie and Niel. When we grouped up for the first time everyone agreed that it was colder than yesterday. Yesterday's gusty offshore winds had has their effect and I measured 9.0°C/48.2°F. Other than that the swimming conditions were great. The water was glassy with just a bit of roll and nice and clean. The waves were a bit larger than yesterday at 3' but still easy to walk out through. We decided to do a triangular route that could be 2 miles long but would not take us too far offshore if anyone got too cold. Everyone was digging extra gear out of their bags to deal with the cold. I put a second cap under my neoprene one, Jodi added gloves and Stephanie borrowed my spare pair of big goggles which cover up more of your face and prevent the dreaded ice cream headache. 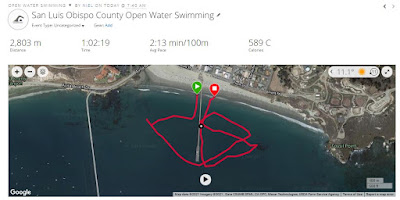 Niel, Stephanie and Jodi did 1-1/2 triangles while Theresa went off of the front and completed a full 2 laps for two plus miles. 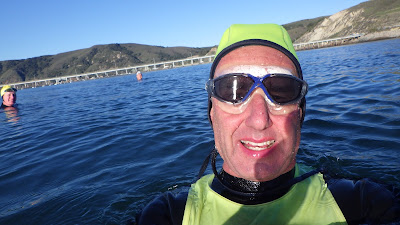 My first and only picture of Stephanie, Theresa and Niel with Jodi behind my head at the mouth of the creek. It was not a day to mess about doing anything but keeping moving.
I plan on swimming Tuesday at 8 and thursday at 8:45.