Today's swim was a personal record for me. I have never gone today's distance in water that was this cold. Throw in some bumpy and choppy conditions and we all felt we had done something today.
It was sunny, 50 degrees and calm at Avila Beach at 8AM. It was gusty in San Luis Obispo when I left for the beach so there would be wind later. Jodi, Stephanie and Niel swam a route that Jodi picked. From the end of the Avila Pier we would swim to a spot off of Fossil Point, back to the Avila Pier then over and back to the end of the Cal Poly Pier. I figured this would be about 2 miles. That would be enough because there was no reason to assume that the water had warmed up since Thursday.  I measured a ocean temperature of 9.5°C/49°F at the end of the Avila Pier. 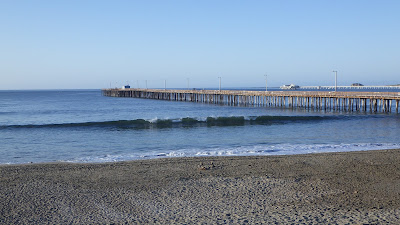 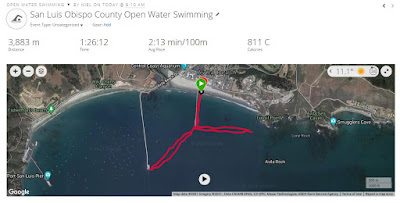 We had ocean swells on the way to and from Fossil Point. The area towards the point and further east is more exposed to ocean swells. I was thinking that we would have it easier towards the Cal Poly Pier because it is more sheltered from the ocean, but an offshore wind had come up and there was a head high chop pushing off of the beach over there. 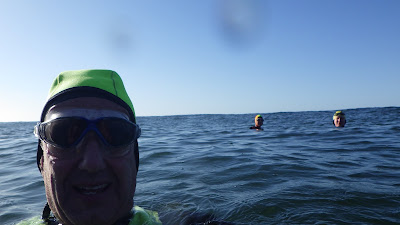