It was warm and sunny at Avila when I got there at 9. It was 75 degrees and felt like it was going to be a lot warmer. The water was very clear and 54°. 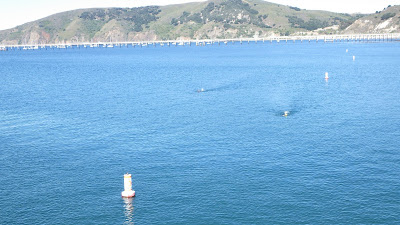 While I was measuring the water temp. I caught Leslie and Jodi
coming along the buoy line back to the pier at the end of their swim.
They told me that they had encountered lots of jellyfish out near the end and to the west of the Avila Pier.
I spoke to Tom Lorish as he was getting in just after 9.
David Cheney and I got in at 9:30 and stayed close to shore. We swam down and back along the buoy line, over to the Cal Poly Pier and another half lap along the buoy line. We didn't see any jellyfish. We did meet Tom Lorish who had been out near the end of the pier and he saw 1000's of jellyfish. Fortunately they were deep enough that he wasn't in amongst them. 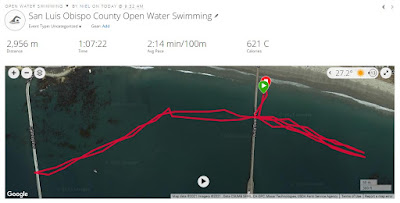 Just as I was turning in around the first buoy I saw Theresa. She had been swimming all over th eplace and had encountered a lot of Moon Jellies. Trust a graduating marine biology major to know what they are.
I'll be meeting Duke at 7:30 tomorrow morning and we'll see if the Moon Jellies get up early.
If you want to see Moon Jellies from a comfortable distance the Monterey Bay Aquarium has a big exhibit that in itself is worth the trip.
niel
Posted by Niel at 12:54 PM