I finished my 7AM ZOOM meeting at 8:15 and headed to Avila thinking that a nice long swim would be nice. I had a 2200M loop scouted, a variation that I had never done before, and I was thinking about doing two laps of the loop if the conditions we neither too cold nor bumpy. Today was my day. Avila had it's usual June overcast with a light wind out of the SE, the air temperature was 57° and the water was up to 55°! The water was glassy and the surf was up with sets of 4+ foot. I saw Tom Lorish as he was heading to the water as I was getting ready.
The water felt warmer wading in and didn't have any shock value on my face. 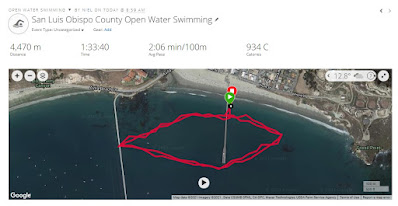 The loop was out to the first buoy on the east side, under the pier and to the last buoy at the creek mouth, to the second crossbars on the Cal Poly Pier, to the end of the Avila Pier, to the last buoy on the east side and back along the buoys to the start.
The first lap was the 'harder' one. I was doing a lot of thinking, anticipating doing the whole distance, and it made each leg feel long.  Once I began the second lap the anticipation fell away and I was just swimming, the legs felt shorter and I swam harder for the last 1000M. 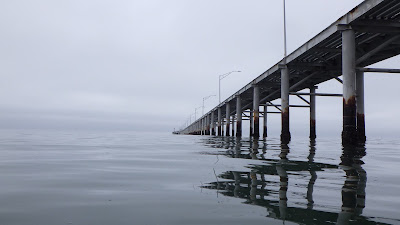 I took this picture from the second crossbars looking out to the end of the Cal Poly Pier. I didn't realize that there was such a big long swell running until I saw the photo.
I never noticed the swell while I was swimming. 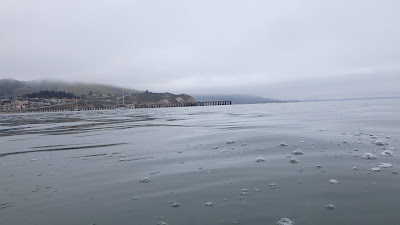 The view of the 620M leg from the second crossbars on the
CP Pier to the end of the Avila PIer. Great swimming conditions; warm(ish) water, a glassy ocean, no lane lines and no turns and definitly no crowds.
Tom spoke with Peter Kelley after he go out. Peter had had a hip replaced and is now taking short walks. On behalf of all of the Avila Dolphins I'd like to wish him  a speedy recovery and hope to see him back in the water this summer.
Kris and I will go to the Madonna Farmer's Market Saturday morning so I'll be at Avila to swim at 9:30.
niel