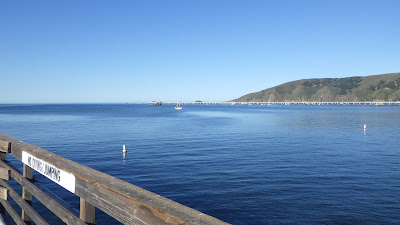 Duke, Niel and Tom Lorish had beautiful, cloud free and breezy morning swims in Avila Beach.  The air temp was 58°, the water was 55° and the offshore breeze was gusting and would become a major factor. 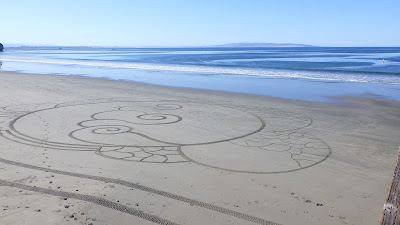 Someone had created some very nice art on the beach. 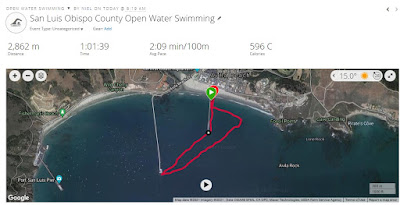 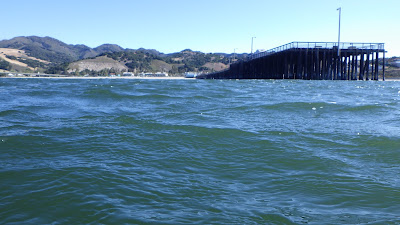 On the leg to the Cal Poly Pier conditions became increasingly bumpy as I got farther from shore. I was getting moved around a lot but the swimming was OK. The chop was coming over my right hip and giving me a push. Reversing directions at the end of the CP Pier and having the chop come over my left shoulder let me know just how bumpy and pushy it was. Right at the end of the CP Pier I swam over a smack (yes, I Googled it) of 100's of dinner plate sized sea jelly's. The were completely clear. My fear about getting stung kept me from trying to get a photo. I wish I'd tried.
The wind must have been increasing because the chop got bigger and the current stronger as I swam towards the Avila Pier. Before I arrived at the end of the pier I had decided that I was done with swimming this morning and abandoned any idea of going back over to the CP Pier and just came in.
When I was changing I could see Tom hammering his way from the CP Pier to towards the Avial Pier. It was impressive. He was easy to see because there was a lot of big splashing from his arms banging on the chop.
I'm going to swim at 9:30 on Saturday and 7:30 on Sunday.
niel
Posted by Niel at 12:12 PM