Duke, Niel, Jodi, Leslie and Pat got in at about 7:40 AM. Avila was grey with thick overcast that was almost spitting but no fog, much like yesterday. The air temperature was 60° and the water temperature was hanging at 57°. The surf was a little larger with some occasional 4 footers but it was still glassy with a swell out of the SW. I suggested doing the swim that I did yesterday in the opposite direction, starting along the west buoy line and over to the Cal Poly Pier. At the 4th buoy on the east side Duke, Leslie and Jodi went back along the buoys and in. Pat was hoping to do 4K so he and I swam to the end of the Avila Pier, to the last buoy on the west side and back along the buoys to our starting point and in. It worked out to 4,090 meters. 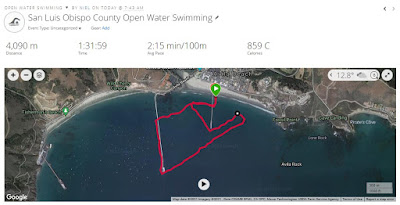 I saw Tom Lorish as I was leaving. He had been swimming in the same neighborhood as we were but we never met up.