We had storm conditions in July this morning. A weather front was moving through with a steady wind and chop out of the SE and spitty drizzle to go with the low gray lid that cut off the tops of the hills that circle San Luis Obispo Bay.  There would be 'conditions' for today's swim. The air temperature was 57° and the water temperature was holding up at 56.5°.  I proposed swimming out to the end of the Avila Pier, then over to the end of the Cal Poly Pier, along the pier to the second crossbars and back to the buoy line on the west side and in. This turned out to be a route that swam a lot longer that it measured. 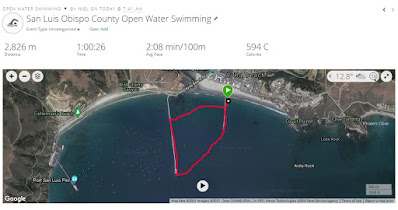 As an introduction the swim out along the Avila Pier seemed longer than usual. 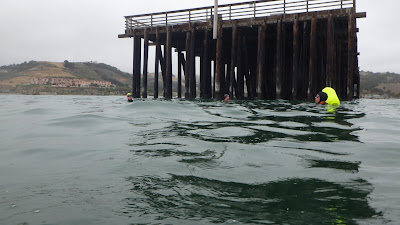 Sue out of the frame to the left, Jodi, Leslie and Pat at the end of the pier. 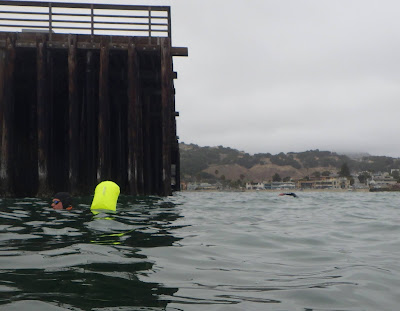 Pat with Duke joining up at the same spot.

Our direction from the Avila to the Cal Poly Pier was across the chop making this leg a splashy bit of work.
That is Duke in the center of the photo trying to keep his head down. 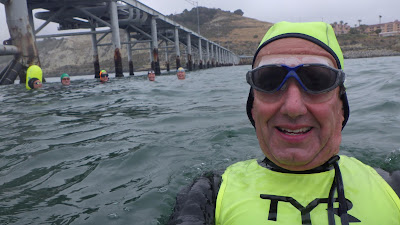 After we go out I spoke with Tom Lorish as he was getting in and Paula and Heidi up on the boardwalk. Paula was joining a group of Masters swimmers from Sinsheimer Pool in SLO who were getting in and Heidi is an Avila Dolphin who I had not seen since the pandemic. She has been swimming at Morro Bay and was getting in by herself to get reacquainted with Avila.

I spoke with Sue as I was getting changed. She will swim tomorrow morning before heading back to London. She will be back next month.

I'd like to go back to swimming at 11 on Sundays once I get comfortable with the crowds and how things are going. I miss the group and sitting on the beach. I'll post more when that change seems like the right thing to do