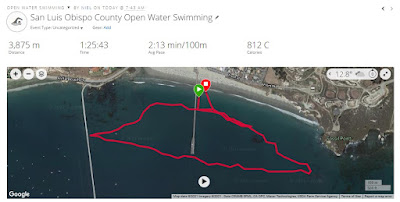 It was grey and cool at Avila, 56° with 55° water. There was no wind and the ocean was glassy and nice and clean. We did run into a smack of Moon Jellies that was about 30M across near the end of the Avila pier.  A Google search says that their sting is not powerful enough to penetrate human skin. They are capable of lifecycle reversal, so while they only live for a few months, they can grow younger rather than older. 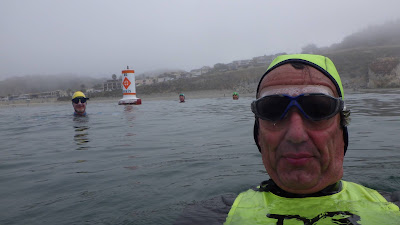 Tom, Pat, Duke and Niel at the last buoy on the east side.
Tom was just starting his swim and we were about to head to the barn.
Wednesday Evening Swims -
Leslie and Jodi have started swimming at 5:15 on Wednesday evenings and would welcome anyone who wants to put a great end to their day. Meet at the lifeguard stand on the east side of the pier.
I'm planning on swimming at 8 on Tuesday and Duke may show to do his 1000 yd sprint workout.
niel
Posted by Niel at 11:32 AM